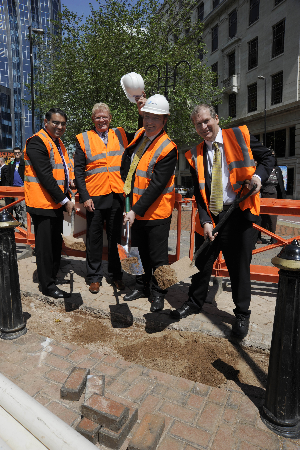 Birmingham transport authority, Centro, has commenced construction on the Midland Metro extension, which will run between Snow Hill and New Street stations in the West Midlands, UK.

The £75m Metro extension will link the two major rail stations to the historic Jewellery Quarter to the Black Country, while transporting more than 3.5 million passengers a year.

"This scheme is great news for Birmingham and the West Midlands and will provide a new, greener transport choice for those wanting to reach the city’s shopping streets, as well as the emerging business district in Snow Hill," Baker said.

The streets of Birmingham will see the return of trams for the first time in more than half a century under the extension project, which is part of a wider £127m joint project between Centro and the Black Country and Birmingham City councils.

"Birmingham remains the only city of its size in Europe without a rapid transit network, despite its economic advantages."

Trams will run from the existing Metro terminus at Snow Hill, along a £9m Ballymore-built viaduct, down Upper Bull Street and Corporation Street and on to Stephenson Street.

Centro vice chairman Jon Hunt said that the start of work on the Metro extension is a real milestone in the transformation of the city’s transport system.

"It will not only bring jobs and increased economic activity but will also help create a much-improved shopping environment, especially in Corporation, which will be cleaner, quieter and far less congested," Hunt added.

Birmingham City Council Cabinet Member for Development, Jobs and Skills Tahir Ali said that Birmingham remains the only city of its size in Europe without a rapid transit network, despite its economic advantages.

"This extension will start to put that right and serve as a platform for further routes to key locations, like the airport and the forthcoming high-speed rail station," Ali said.

The extension project is scheduled to be completed in 2015.

Image: Birmingham Transport Minister Norman Baker started the dig at the junction of Corporation Street and Bull Street to kick off the extension project. Photo: courtesy of Centro.