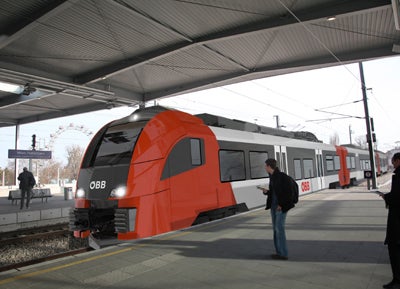 The order is part of a master agreement signed with Siemens in April 2010 for the supply of up to 200 regional passenger trains.

A formal contract for the first batch of trains will be signed following the expiry of the regulatory stand-still period required under procurement law.

Scheduled to be delivered from the end of 2015, the three-unit electric trainsets will be built at ÖBB Technische Services’ Jedlersdorf site in Austria, with bodyshells supplied from Siemens’ Krefeld plant in Germany and bogies from its Graz facility in Vienna, Austria.

Of the total order, 30 244-seat trains will be used on the Vienna S-Bahn network, replacing the ageing class 4020 EMUs.

"The order is part of a master agreement signed with Siemens in April 2010 for the supply of up to 200 regional passenger trains."

The remaining 70 trains, which will have 259 seats and four sets of doors, will be used on regional services, with 35 operated in Lower Austria, 18 in Styria and 17 in Upper Austria.

The ÖBB Desiro ML trains will be capable of operating at a maximum speed of 160km/h and will have low-floor entrances for wheelchair and family accessibility.

Compared to previous models, the improved drive systems in the Desiro ML trains will help to achieve further reductions in energy use, Siemens said.

Image: Of the 100 Siemens Desiro ML trains, 30 will be used for S-Bahn service and 70 for regional rail services in Upper Austria and in Styria. Photo: courtesy of Siemens.