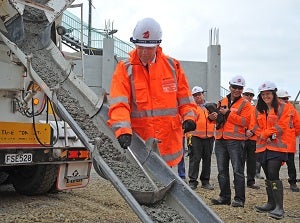 The project includes construction of a new station building and shelter along the majority of the platforms. After completion, Panmure Station will be the main transfer point.

The upgraded station will be the entry point to the new South Eastern Busway and is expected to reduce the walking distance between buses and trains by less than a minute.

According to Auckland Transport, the busway from Panmure Station to Pakuranga town centre and Botany is expected to reduce public transport journeys by up to half and attract around 5.2 million passengers per annum.

The first phase of construction of the busway from Panmure to Pakuranga is planned to start in 2015/16, subject to funding and consents, as part of AMETI second phase.

Auckland Mayor Len Brown said that with 5.2 million extra passengers a year, the AMETI South Eastern Busway is a major part of driving increases in public transport use.

"The project includes construction of a new station building and shelter along the majority of the platforms."

"People will be able to quickly get from Pakuranga to all parts of the CBD by using the uncongested busway then easily transferring to a new electric train to any of four stations in the CBD when the City Rail Link opens," Brown said.

"Auckland’s electric trains, integrated ticketing and projects like the City Rail Link will further boost patronage and create a transport network Auckland can be proud of."

The second phase of AMETI, from Panmure to Pakuranga, is scheduled to start around 2015-2016.

Image: The Panmure Station upgrade will include construction of a new station building and shelter along the majority of the platforms. Photo: courtesy of Auckland Transport.