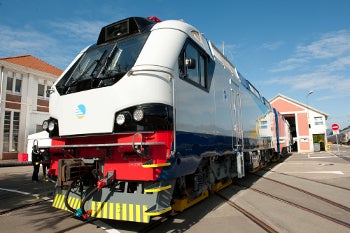 Alstom, together with its Russian partner Transmashholding (TMH), has unveiled two new freight locomotives, the 2ES5 for Russia and the KZ8A for Kazakhstan, at the 4th International Rail Salon of Engineering and Technologies EXPO 1520 in Moscow.

The 2ES5, the first Russian locomotive with asynchronous traction drive, is designed by TRTrans, an engineering centre developed by Alstom and TMH.

Designed for rail traffic optimisation, the fuel-efficient train comprises the latest technology and modular design that provides a high safety level and lower lifecycle cost, and can resist temperatures as low as -50°C.

Its features include traction drive, modular design and electronic braking that eliminates braking pads from deterioration.

The first 2ES5 locomotive is currently undergoing trials on the test track in Sherbinka, near Moscow, with 200 vehicles scheduled to be delivered to RZD, in line with the contract signed on 30 May 2011.

"The 2ES5, the first Russian locomotive with asynchronous traction drive, is designed by TRTrans, an engineering centre developed by Alstom and TMH."

Specifically designed to operate in extreme cold temperatures of as low as -50°C, the locomotive is produced at the EKZ manufacturing site, a joint venture between Kazakh Railways (KTZ), Alstom and TMH, in the city of Astana, Kazakhstan.

The first KZ8A is currently being tested in real conditions in Kazakhstan, from Astana to Yermentau and Karaganda, with later locomotives undergoing various testing procedures, including dynamic tests.

By the end of 2013, twelve KZ8A locomotives are scheduled for delivery to Kazakhstan.

To date, Alstom and TMH have secured orders for 700 locomotives in Russia and Kazakhstan, totalling €3.5bn.

Image: The new locomotives will be delivered to Russia and Kazakhstan. Photo: courtesy of ALSTOM.