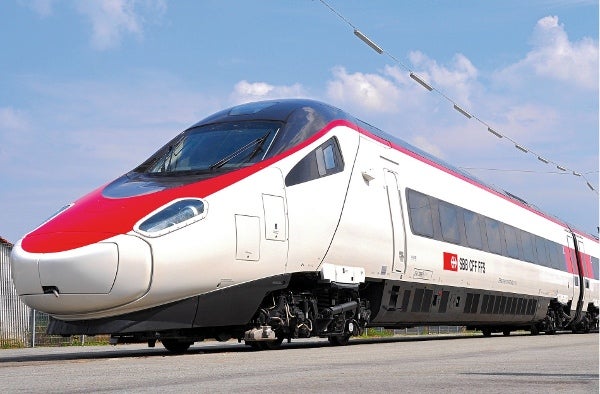 The new trains are scheduled to be delivered in 2015 and will be added to the existing fleet of seven trains already owned by SBB.

The order is an option of a contract for seven ETR610 Cisalpino II trainsets signed in March 2004 between Alstom and Cisalpino, the former joint venture of SBB and Trenitalia.

The new trains will be operated by SBB on the lines between Milan and Geneva and Milan and Zurich.

Alstom’s Pendolino tilting trains can tilt up to 8 degrees in curves and run at speeds up to 35% higher than conventional models.

The new seven-car trains will have a maximum operating speed of 250 km/h and will be capable of accommodating up to 430 passengers.

Alstom said that the new Pendolino is 95% recyclable and fitted with an electrical brake system that recycles up to 97% of power back into the catenary system that saves up to 8% energy use.

"The new trains are scheduled to be delivered in 2015 and will be added to the existing fleet of seven trains already owned by SBB."

Alstom’s Savigliano plant in Italy will manufacture the new trains to comply with European TSI standards, equipped with Alstom’s Atlas European signalling system (ERTMS), which is suitable for operation in Switzerland, Italy, Germany and Austria.

Other Alstom Transport facilities involved in the production include Sesto San Giovanni and Bologna in Italy, Le Creusot, Ornans and Reichshoffen in France, Montreal in Canada, and Neuhausen in Switzerland.

Alstom launched its Pendolino trains in 1970; since then, the company has sold more than 400 trains, which are in operation in Italy, Germany, Czech Republic, Switzerland, Slovenia, UK, Portugal, Spain, Finland, China and Russia.