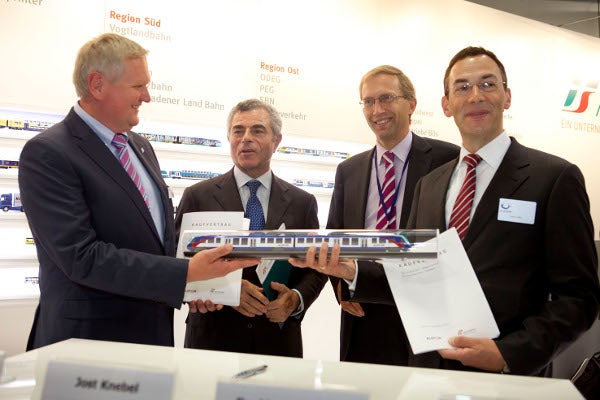 Signed at the Innotrans 2012 trade fair in Berlin, the trains will be designed and built at Alstom’s Salzgitter plant in Germany and are scheduled to be delivered in 2014.

The trains will be operated between Frankfurt and Saarbrücken (Nahe / Rhine-Hessen region), and between Koblenz and Kaiserslautern (Saar region) in Germany.

Alstom’s Coradia two and three-car diesel multiple units (DMUs) will be capable of running at maximum speeds of 140km/h.

In order to improve passenger safety, the company is installing monitoring cameras and the latest crash elements.

The new trains will be equipped with spacious aisles, air conditioning systems, low-floor entrances and will have seating capacities of 160 seats (Lint 54) and 270 seats (Lint 81), according to Alstom.

Alstom said that it has installed a series of safety measures on the trains, in compliance with the European Standard for Collision Safety of Rail Vehicles.

"Alstom’s Coradia two and three-car diesel multiple units (DMUs) will be capable of running at maximum speeds of 140km/h."

The emissions standards of the European Stage IIIb regulation will also be met by the Coradia Lint, which Alstom said will be more environmentally efficient than the trains used so far on the Southwest Diesel Network.

The company said that the emission control and measures inside the engine are expected to reduce the emission of particles to around 90%.