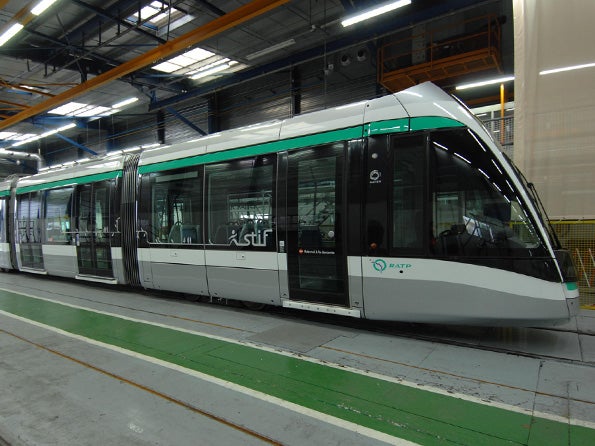 Alstom has delivered the first of 19 Citadis low-floor light rail vehicles (LRVs) to STIF for operation on the 11.2km T7 tramway line in Paris, France.

The locomotive is the first of 70 LRVs that were ordered in January 2011 for lines T7 and T8 in a deal jointly funded by public transport authorities STIF and RATP.

T7, scheduled to be opened at the end of 2013, will run from Villejuif to Athis-Mons serving 18 stations.

Under the second phase of the project, the T7 line is planned to be extended by 3.8km between Athis-Mons and Juvisy-sur-Orge, including six new stations.

Each of the T7 and T8 Citadis tramsets will be 32m long and 2.4m wide, and will be capable of accommodating over 200 passengers.

All the Citadis trams for the T7 and T8 lines are being produced in France, with design and assembly being done at Alstom’s plant in La Rochelle.

"T7, scheduled to be opened at the end of 2013, will run from Villejuif to Athis-Mons serving 18 stations."

A second tranche delivery under the deal will include 20 trams for the 8.5km T8 line that will connect Saint-Denis with Epinay and Villetaneuse.

After the first and second tranche deliveries, RATP will own the world’s largest fleet of Citadis trams with 145 in operation, including 60 on the T2 line and 46 on the T3 line.

Image: STIF will operate the 19 Citadis trams on the T7 line in the Paris metropolitan area. Photo: courtesy of Alstom.