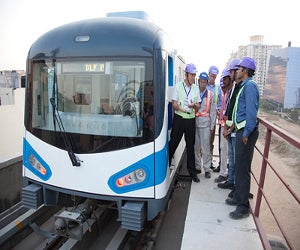 The new six kilometre turnkey metro line in Gurgaon, in Delhi’s metropolitan area, India, has been opened for operations by Rapid MetroRail Gurgaon.

Expected to help cope with a volume of 30,000 passengers per hour, the new fully electrified line is believed to ease travel experience for around two million passengers who commute by metro in Delhi on a daily basis.

As well as delivering rail technology and installing the service workshop, signal technology and system integration for the Gurgaon metro line, Siemens provided the trains and the electrification systems, including the interfaces.

Around seven aluminum metro trains were supplied by the company, which are designed to travel at a top speed of nearly 80km per hour on a standard-gauge track.

Each of the three-car trains that will run on the line is expected to offer a maximum transport capacity of about 800 passengers.

The systems and technologies installed were intended to help achieve a headway of 120 seconds, especially during peak traffic times.

By the end of 2015, the existing Gurgaon metro line will be extended by around seven kilometres to the south.