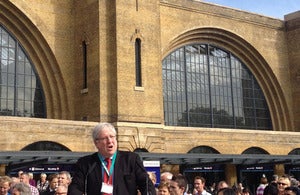 A £550m revamp of King’s Cross railway station in London, UK, has concluded, with the official opening of the 7,500ft² King’s Cross Square, the final part of the redevelopment scheme.

The project, which was one of the UK’s priority infrastructure investments, involved renovation of the original station building as well as its platforms, along with construction of the new western concourse that was opened to passengers in March 2012.

"It has also been the catalyst for one of the largest regeneration schemes in Europe, attracting £2.2bn of private investment and allowing the ongoing development of more than 60 acres of brown-field land into offices and retail space and the construction of 2,000 new homes for Londoners," McLoughlin said.

"The project, which was one of the UK’s priority infrastructure investments, involved renovation of the original station building."

Designed by architects Stanton Williams, the new public square offers rail users, local people and other commuters a new open space and improved entrances to the London Underground, as well as an area dedicated to public art and a lighting scheme to highlight the area’s architectural features.

Work on the station redevelopment started in 2007, and since then Network Rail has built a new platform, built the new concourse, restored the Eastern and Western Range offices along the length of the station and replaced the historic Handyside bridge with an accessible footbridge.

"Major investment in our railways is just one part of a pipeline of over £100bn worth of public investment in infrastructure projects over the next parliament announced by government earlier this year," McLoughlin said.

Image: The official opening of King’s Cross Square marks completion of one of the largest station modernisation projects across the UK’s rail network. Photo courtesy of Department for Transport.