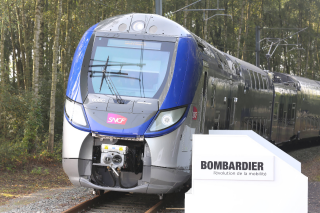 Bombardier Transportation has unveiled its first Omneo double-deck train, the latest addition to the company’s double-deck EMU range, at its site in Crespin, northern France.

The new Regio 2N vehicle is available in several configurations, from six to ten cars, with a total length of between 81m and 135m, and has capacity to travel at speeds between 160kmph and 200kmph.

Bombardier said the new EMU is the eighth in a batch of nine test trains the company has built to allow several tests required for approval to be carried out simultaneously.

Several trains will run test journeys from January 2014 while waiting for certification, to allow SNCF to operate and check operational reliability before full commissioning.

Bombardier Transportation president Lutz Bertling said the increasing use of regional trains in France reflects successful efforts to facilitate the sustainable and comfortable mobility of their populations.

"This train is the right choice to meet the future needs of regional transportation not only because of its large capacity, passenger comfort and high performance, but also thanks to the many configurations available, such as the InterCity V200 version," Bertling said.

"Bombardier’s Crespin teams have met an outstanding technical challenge by delivering a completely new industrial product as complex as this one, and in such a short time-frame," Bertling added.