Christopher Wylie shot to global prominence as the leading whistleblower in the Cambridge Analytica scandal, but now he is turning his considerable data skills to fashion, through his current role as research director at H&M.

This move, announced in January 2019, may have come as a surprise to many, but for Wylie it was a natural choice given his work prior to joining the now infamous data firm.

“One of the things that people often don’t realise about me is that before Cambridge Analytica, I was actually midway through a PhD, where I was looking at fashion trend forecasting as the focus of my research,” he says, speaking during a talk at technology conference Collision from Home.

“I’m interested in how culture changes and evolves, and fashion is often a primary artefact that we can look at in terms of the evolution of social values, aesthetics and the intermingling of cultures.”

While he acknowledges that it is a move “from perhaps higher-stakes games” of political influence that were played out at Cambridge Analytica, Wylie argues that the fashion industry is an area that is far from frivolous.

“I think fashion has an immense impact on some very intimate aspects of people’s lives,” he says. “Wearing clothing is one of the few things that everybody does around the world save a small exception of nudists.

“It actually has a quite a significant impact, I think, on people’s lives in a way that they may not pay attention to. So in that sense, in a very personal sense, fashion is impactful.”

Central to Wylie’s role at fast fashion giant H&M is data, just as it was at Cambridge Analytica. But while his former role ultimately saw him blow the whistle on the company’s harvesting and manipulative use of Facebook data in political advertising, here he sees the role of data as immensely positive.

“There are ethical and responsible ways of using research and using data,” he says.

“Data is a tool and if you think about all kinds of tools, whether it’s a car or even something like a knife, a chef’s knife can make a Michelin star meal, it could also be a weapon of murder. So it’s the intention, and how it’s used is an important aspect there.”

“So, using data and using research to better understand, for example, how does culture interplay with what people want, and whether or not we’re being responsive to that,” he says.

“Fashion has long had a problem with, frankly, Eurocentrism and we have a much wider market. So how can we be more inclusive to those more diverse markets?”

As part of this, he is also harnessing data to help with the practical reality of sizing, an issue H&M has historically been met with criticism over.

“Fashion hasn’t, I think, really spent a lot of time looking at the fact that there is a wide breadth of different shapes and sizes of people around the world. And our job is to adorn those bodies in fabric,” he says.

“So if we don’t have a good understanding of those shapes and sizes and how people are, then we aren’t doing our job.”

With this in mind, Wylie contrasts his current role with his previous position, saying that he feels “much more comfortable” creating choices for people.

“People, I think rightfully, are sceptical of many different applications of data and AI. But there are genuinely positive impacts that you can have if you apply data in a way where you are trying to amplify a person’s agency or give them more choices, rather than leading them down a path that you want for them.” 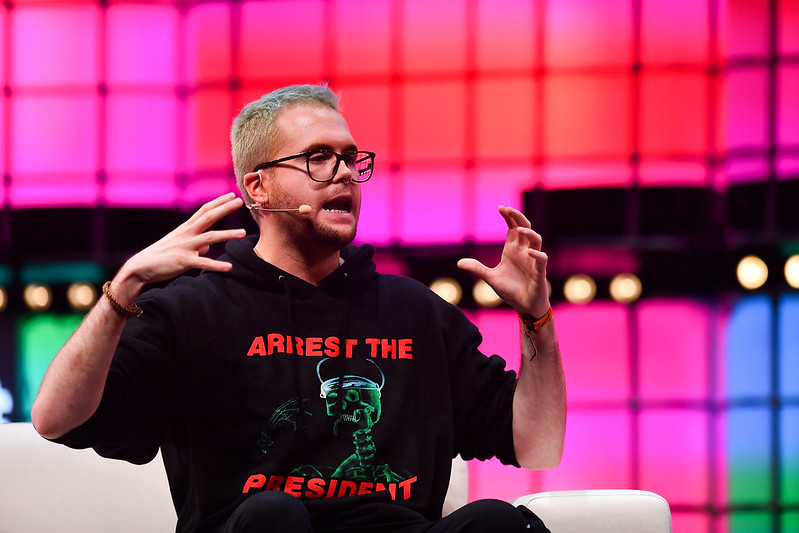 Christopher Wylie in 2018, shortly before his appointment at H&M. Image courtesy of Web Summit

Data, H&M and the pandemic

However, with the onset of the coronavirus pandemic, the retail environment has naturally shifted, which has seen Wylie’s focus at the fashion company change.

“The types of work that focusing on right now is really trying to understand how this pandemic is going to impact young people, and particularly young women,” he explains.

“Our customers are predominantly younger and they’re more female. And these are the kinds of people who are going to be more vulnerable and more impacted by this pandemic.

This social focus is something he sees H&M paying considerable attention to in the post-pandemic world, although he questions how much attention was placed on it prior to Covid-19.

“I’m happy that I work for a brand that has committed to pay for all of its orders, and it’s not backing out just because of the pandemic,” he says, in reference to reports that some major brands have put considerable strain on garment workers by deciding to cancel orders.

“Frankly, I don’t think there’s been enough focus in pre-pandemic times towards the industry in general looking at, you know, whether it’s labour standards, or enhancing our sustainability credentials.”

However, for H&M the values and decision drivers of Generation Z will be particularly important to its post-pandemic rebuilding, and here Wylie sees particular promise.

“Gen Z is the generation that emerges from a pandemic, and really comes of age. Look at what’s happened in these young people’s lives, before the pandemic: growing up with the election of Donald Trump or with Brexit, or with political turmoil, whether you’re in Eastern Europe or in Brazil,” he says.

“Oftentimes people in marketing will talk about brand authenticity and all of that, but one of the things that I’ve noticed is that when you have younger consumers wanting business to take action on important social issues, it’s because the traditional political or social leaders that previous generations may have looked for look to for leadership, a lot of younger people don’t trust and don’t support.”

For businesses, Wylie argues, this means that change is on the horizon.

“What that means is that there is more responsibility going to be placed on the private sector and on large businesses to stand up and fill some of that role,” he says.

“So I think responsive businesses should pick up on that and understand that your future consumers are going to be thinking very differently than perhaps your generation has about commerce and consumption.”