Rendering of the Moscow-Kazan high-speed rail line. Image courtesy of The FAA Glavgosexpertiza of Russia.

The Moscow-Kazan railway line will have 16 stations. Image courtesy of The FAA Glavgosexpertiza of Russia.

The Moscow-Kazan rail line is being developed by JSC High-Speed Rail Lines. Image courtesy of The FAA Glavgosexpertiza of Russia.

The Moscow-Kazan high-speed rail line will use next-generation bullet trains with a maximum speed of 440km/h. Image courtesy of The FAA Glavgosexpertiza of Russia. 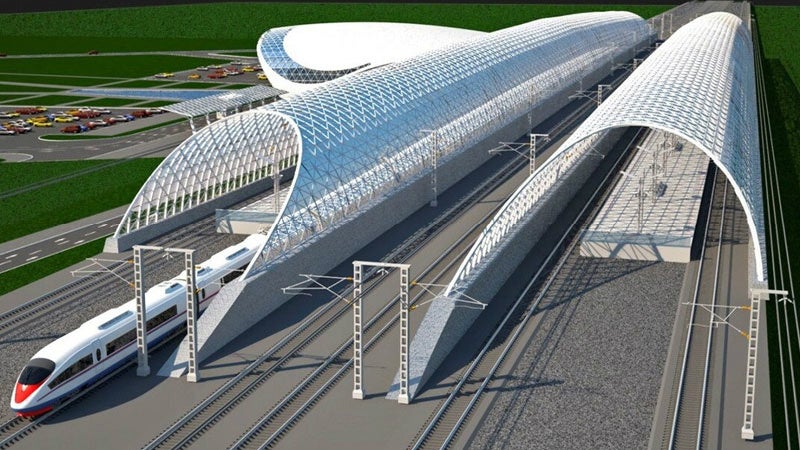 The rail project is being developed by JSC High-Speed Rail Lines, a subsidiary of JSC Russian Railways, through a public-private partnership. It is expected to create more than 373,000 new jobs.

The route will be built in 12 stages, with construction on the Moscow-Kazan route scheduled to be started in 2018 and commissioned in 2020.

Moscow-Kazan route is the first phase of the Russian section of a high-speed rail network between Europe and Asia, which aims to address the increased cargo transportation between Beijing, China and Moscow, Russia.

The Moscow-Kazan railway project was approved by the Russian Government in May 2013. A consortium of OJSC Mosgiprotrans, OJSC Nizhegorodmetroproekt, and China Railway Eryuan Engineering Group Co. designed the high-speed line.

The design for the third and fourth stages, covering the route between Zheleznodorozhnaya station in Omsk to Vladimir station, was finalised by FAU Glavgosexpertiza of Russia in July 2017.

When commissioned, the Moscow-Kazan high-speed train service will reduce the travel time from Moscow to Kazan from 14 hours and seven minutes to three hours and 30 minutes.

The journey time between Nizhny Novgorod and Kazan will be reduced from 10 hours and 32 minutes to one hour and 30 minutes, while the travel time between the capital cities will be 60 minutes.

“The rail line is expected to serve approximately 10.5 million passengers in its initial year of operation.”

The project is intended to improve interconnection and economic growth in the regions of Russia. It will also support the increased needs of cargo transport and mobility of population.

The Moscow-Kazan high-speed rail line will have two main tracks with a track gauge of 1.52m and a maximum slope of 24%. It will include 1,517km-long ballastless tracks and 83km-long ballast tracks along the route.

It will have a total of 33 interstations, including 16 embarkation / disembarkation stations and 17 dispatch stations. The main station tracks will have a length of 164km.

Approximately 800 artificial structures will be built along the route using 354,000t of metal for pedestrian paths and water courses. The scope of the project will include 53 large and 78 medium bridges, 49 viaducts, 33 railway overpasses, 128 road overpasses, and 454 culverts.

Russian Railways plans to operate 300m-long bullet trains on the Moscow-Kazan high-speed rail route. The trains will have an operating speed of 360km/h and a maximum speed of 440km/h.

The trains can be powered by 3kV DC traction network or 25kV AC traction network. They will use between 12 and 16 conditional wagons for cargo transportation. The trains will be able to operate in temperatures ranging from -50°C to 40°C.

The dual fibre-optic communication system will be used for transmission of signals using optical fibre cables.

The track will also be equipped with locking systems, thermal viewers, and surveillance cameras.

The total cost of the Moscow-Kazan high-speed rail line project is estimated to be more than RUB1tn ($30.31bn).

In April 2016, China Railway International Group agreed to provide a loan of RUB400bn ($6.2bn) for the construction of the Moscow-Kazan rail line over a 20-year period.

The project will also be supported by the Russian Pension Fund, investment, subsidies, the National Wealth Fund, and guarantees.