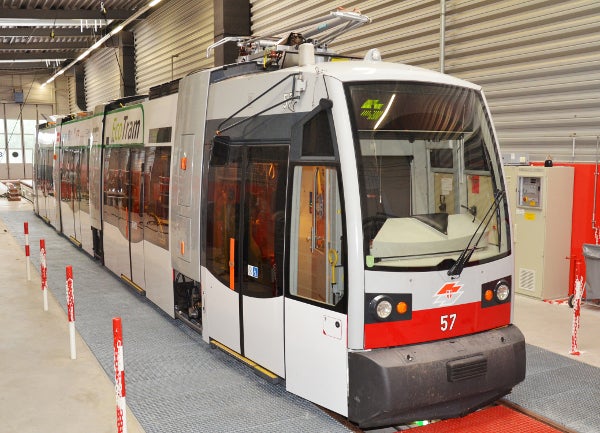 "The EcoTram project will show how far this figure can be reduced," Karlbauer said.

"Experts calculate potential annual savings of up to 3000MWh for Wiener Linien, which equates to the electricity consumption of a small town and would reduce CO2 emissions by 600,000kg over the course of a year."

As part of the tests, which are expected to be carried out until May 2014, the latest air-conditioning systems are being used to work out the optimal hardware and software configurations.

During the initial phase of the project, the EcoTram was trialled in a climatic wind tunnel and in standard passenger service prior to being reconfigured and the same measurements were taken again.

"Heating, air conditioning and ventilation can make up 30%-40% of a tram’s total energy consumption."

The early trials involved testing inlet air temperatures for the air-conditioning systems, the air current flows within the vehicle, and the impact of heat and moisture generated by passengers.

The research project has been ongoing since 2009 as part of the Austrian Research Promotion Agency’s New Energies 2020 programme, and it is funded by the agency’s Climate and Energy Fund.

The complete tram was built by Siemens, while the Automation and Control Institute at the Vienna University of Technology (TU Wien) was responsible for the development of control software.

Rail Tec Arsenal built the measuring technology and Vossloh Kiepe delivered the heating and air-conditioning units, while the overall project is managed by Schieneninfrastrukturgesellschaft (SCHIG).

Image: Trials on Siemens’ Ultra Low Floor low-energy tram are expected to be carried out until May 2014. Photo: courtesy of Siemens.