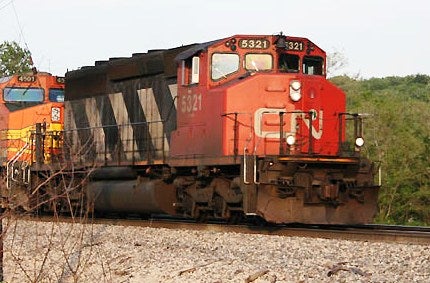 The locomotives are undergoing tests along the 300-mile stretch between Edmonton and the oil sands region of Fort McMurray.

In order to start the tests, CN has renovated its two existing 3,000hp Electro-Motive Diesel (EMD) SD40-2 diesel locomotives to hybrid engines which will use 90% natural gas, with 10% diesel fuel for ignition.

Fuelling and maintenance for the locomotives will be carried out in Edmonton with Energy Conversions (ECI) supplying the conversion kits and the natural gas fuelling is being provided by Encana.

CN executive vice-president and chief operating officer Keith Creel said that the railway has launched the locomotive test to explore the use of natural gas as a potential alternative to conventional diesel fuel.

"The locomotives are undergoing tests along the 300-mile stretch between Edmonton and the oil sands region of Fort McMurray."

For the initiative, GMTS will develop natural gas liquefaction requirements and distribution systems, while a new natural gas tender rail will be jointly developed by the project partners.

The partners expect to test the new engines in a laboratory in 2013 and road-test the prototype locomotives in 2014.

Image: CN is refurbishing its two EMD SD40-2 diesel locomotives to hybrid engines to carry out the tests in northern Alberta Photo: courtesy of Brandon Priebe.