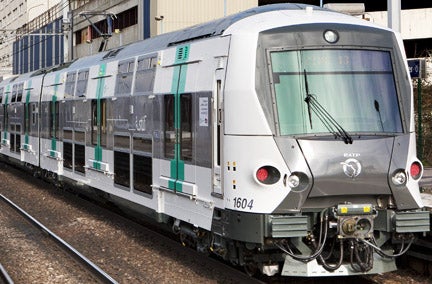 A consortium of Alstom and Bombardier has won a €1bn contract to supply an additional 210 double-deck train cars to the Greater Paris commuter rail network.

The contract is part of an option exercised following the original contract signed in April 2009 for the delivery of an initial order of 60 MI09 trains.

The trains are set to run on line A of the Reseau Express Regional (RER) commuter line in Greater Paris.

Bombardier will deliver one third of the order, which is worth €336m, while Alstom will be responsible for the remaining €700m.

Two thirds of the commuter rail project is financed by the Régie Autonome des Transports Parisiens (RATP), with the remaining third financed by the Syndicat des transports d’lle-de-France (STIF).

The new trains, which are expected to be delivered between 2014 and the end of 2016, will improve passenger comfort, capacity and performance on line A.

The first MI09 train was launched on the line in December 2011 and has already covered 500,00km, while the new trains will operate on RER A of the Ile-de-France Region network.

Bombardier will deliver the three intermediate cars of each five-car train set, which it will design and assemble at its manufacturing plant in Crespin, France.

Each MI09 double-deck train will have a five-car length of 112m and be equipped with three large doors to facilitate boarding and disembarking at stations.

The trains can run at speeds of 120 km/h and hold up to 1,300 people, helping the French rail authorities to transport a million passengers every day.

In addition, the trains will feature a system to transmit train operating parameters in real time to maintenance teams, which allows them to anticipate potential maintenance operations.

Image: The new trains, which will be delivered between 2014 and the end of 2016, will be run on line A. Photo: courtesy of Bombardier.