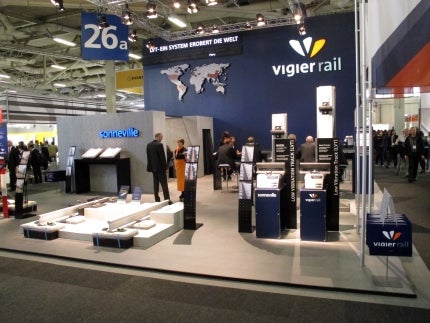 The sister companies, Vigier Rail Ltd. and Sonneville Ltd., again had a presence at the world’s largest trade fair for the rail industry in Berlin with a joint exhibition stand. The ninth InnoTrans attracted visitors from 140 countries.

An absolute must for specialists from the world of rail transport technology, InnoTrans provided an outstanding platform, which we took advantage of to also present our "LVT Traffic" world premiere. We have redefined trafficability on ballastless track.

The globally famous Low Vibration Track (LVT) stirred up a great deal of interest with exhibition visitors. To date, more than 1,000 km of track has been built in the world using LVT technology.

In the case of the flat sleepers for normal and metre-gauge track that we also exhibited, we were delighted to receive official approval from the Swiss Federal Office of Transport for the B06 FS just a few weeks before.

Needless to say, the "Gotthard base tunnel" project of the century was also one of our themes. We showed the longest railway tunnel in the world using a detailed film about the installation of the track.

The two roller figure skaters who dazzled our visitors with acrobatics and culinary delights proved to be an eye-catcher.

Our conclusion on this year’s trade fair – lots of interesting discussions and delight at the large numbers of visitors. Many thanks indeed for visiting us and for the interest you showed.

We hope you will honour us again with your presence at InnoTrans in Berlin in two years’ time from 23 to 26 September 2014.