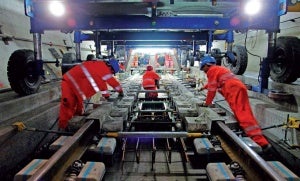 Among the multitude of tasks facing the railway equipment contractor Transtec Gotthard, laying the ballastless track in the Gotthard Base Tunnel is particularly demanding in terms of logistics and complexity. The project required bespoke equipment, and Transtec Gotthard therefore invested in a carefully designed set of specialised plant and mobile machinery, much of which was completely new:

The chosen trackform is LVT (low vibration track) from Sonneville, now a sister company of the Swiss firm Tribeton, which in 2010 became Vigier Rail, part of the French Vicat group. Right from the earliest days of planning for the Swiss base tunnels, SBB had been on the lookout for a suitable track design.

Taking the well-established twin-block sleeper with tie-bar formula for ballasted track, SBB worked with Roger Sonneville to develop a version which could be placed in rubber boots with elastic pads inside for use with ballastless track. The resilience of the pads was intended to replicate the resilience of the ballast while the rubber boot separated the twin blocks from the concrete base in which they were embedded.

SBB undertook an initial trial in the Bözberg tunnel in 1966 and laid a test section in the Heitersberg tunnel in 1974. Subsequent projects, mainly involving tracks in stations, saw the connecting tie-bars removed after installation to allow better access to the track. The design was later selected as a candidate for use in the Channel tunnel.

The very tight specification concerning gauge widening led Sonneville to adopt a deeper concrete embedment, which was only possible by eliminating the tie-bars. This was the birth of the LVT design with independent sleeper blocks. An 800m section of LVT was tested in the Grauholz tunnel between Bern and Mattstetten in the 1990s with a view to its installation in the base tunnels. It was subsequently used in the Zimmerberg tunnel and the 34∙6km Lötschberg Base Tunnel, where the design life was set at 50 years. A similar lifespan is anticipated for the Gotthard version, although observation of existing trackforms suggests that the life of the concrete elements could be considerably longer.

The track is laid in sections on a 20 day production cycle. With the tunnel invert concrete in place, 120m lengths of UIC60 head-hardened rail from Voestalpine are pulled on to the invert by a rubber-tyred tractor. These rail sections are then joined to form an endless string using a flash-butt welder. At this stage the rails are temporarily fixed to the tunnel invert, and the tractor moves forward to repeat the cycle. The next part of the process is to lay and position the concrete blocks which are supplied fully-assembled with the resilient pads, below the base inside the rubber boots taped to the blocks.

The blocks are made on a specially-built production line at the Vigier Rail plant in Müntschemier near Bern. They incorporate preinstalled Vossloh rail fastenings with spring clips arranged in position ready for assembly. A train of 14 purpose-built wagons takes the blocks into the tunnel, and a rail-mounted crane picks up 60 blocks at a time and drops them through a slot into the centre of the track for positioning. Shuttering is added for the prefabricated drainage ducts and crack inducers are installed. The rails are lifted into position with the blocks positioned at 600mm intervals under each rail string. The fastening screws are then loosened and the clips pushed into their final position before the screws are tightened.

With the use of gauge bars, the track is now roughly in its final position. Adjustable lifting jacks below the track and adjustable lateral props combined with laser beams then allow the track to be aligned to within ±0∙5mm. The clips are greased to prevent the base concrete from adhering to them, and protective covers are placed over the rails. Rails are inclined at an angle of 1 in 40.

The final stage of the process is to pour the concrete. Up to 235m3 is produced by the concrete train, enough for two shifts totalling 15h during which more than 200m of poured slab track is completed. Depending on the workload, the train may be formed of 20 or more vehicles pushed by a locomotive at the rear.

A crew welfare car and workshop car are marshalled next to the locomotive, followed by ten aggregate wagons, a water tanker, a power plant, two cement wagons, the mixing unit, a wagon for waste to which a concrete batch that tests badly can be diverted, and a pump wagon for placing the concrete. The aggregate wagons are linked by conveyors which carry a carefully tailored mix of sands and graded stones forward to the concrete batching plant; the materials are accurately weighed by computer before mixing. The water and cement wagons also feed the batcher under computer control using pumps or pneumatic lines.

Finally, a Putzmeister pump on the leading wagon delivers the concrete into a rubber-tyred shuttle that runs on the raised walkways at the side of the tunnel; the shuttle then places the concrete around the blocks to complete the track. Within the 20 day cycle only ten days are needed for concreting, and at peak times about 85 people work on a three-shift system to complete an ‘installation length’ of 2,160m; this figure was determined by the 120m lengths of rail. Tracklaying will be completed in six stages, with each stage consisting of 16km to 20km.

The first few km of track were laid northwards from the south portal in the west or northbound tunnel which is destined to be used for the first running tests. As tunnel finishing works were still in progress, tracklaying at the southern end was halted around the end of March. The tracklaying teams and equipment moved to the north portal where they will begin to lay track southwards in July. This involved the Concrete Train being turned on a loop at Bellinzona before the journey north over the existing Gotthard main line.

Taken from an article that originally appeared in Railway Gazette International, July 2011.