Strong Friendship Between a Thai Rail Fan and CRRC Ziyang 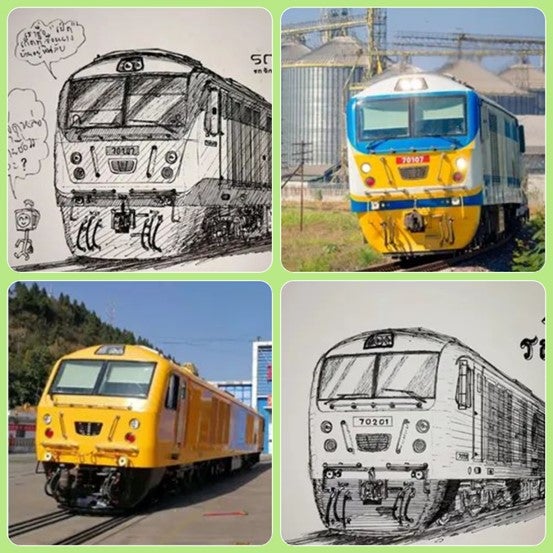 Two years ago, a Thai rail fan named NUT drew many sketches with his own hands, vividly showing the locomotives exported by our company to Thailand.

As a long-time rail enthusiast, NUT is one of the top five people in Thailand who know Chinese trains best. He often uses Facebook and other social media to share pictures, news, and the latest technologies of Chinese trains. CRRC Ziyang Locomotives, China Railways High-speed (CRH), and China Railway (CR) are among his favourites.

NUT lets fans all over the world know that there are many high-quality trains in China.

The 20 May is dubbed ‘Web Valentine’s Day’ in China’s cyberspace because the number 520 shares a similar pronunciation with ‘I love you’ in Chinese.

This year, for 520, NUT once again posted a long article in Thai on Facebook, recalling his fond memories of visiting our company three years ago, as well as expressing his deep affection for CRRC Ziyang and his love for Chinese locomotive products.

He stated in the article: “For me, a Thai rail fan, the most famous in Chengdu is not only the giant panda, but also the CRRC Ziyang locomotive.”

“I believe that many Thai rail fans should have heard of CRRC Ziyang Co., Ltd., because CRRC has produced a large number of railway vehicles for Thailand. In addition, friends who are engaged in railway work should also know CRRC Corporation Limited, which is currently the largest manufacturer of railway rolling stock in the world.”

“When I came to the CRRC Ziyang production line, two locomotives caught my eyes. One is the DFH5 type diesel shunting locomotive, which was built in 1976 and is one of the older types still in use. This locomotive has been used for such a long time, so I think it should be able to represent the quality of Chinese locomotive manufacturing and maintenance! The other is the HXN6 hybrid shunting locomotive. As we knew that railway manufacturers in various countries were starting to study hybrid locomotives, I never expected that CRRC Ziyang was also doing so, and even successfully developed the world’s most powerful hybrid locomotive!

“I really appreciate every opportunity given to me by CRRC Ziyang!”

Today, NUT is still spreading train culture in Thailand. He is planning to design and produce cultural and creative products about the world famous locomotives and CRRC railway locomotives exported to Thailand, so that the Thai people can know more about trains.