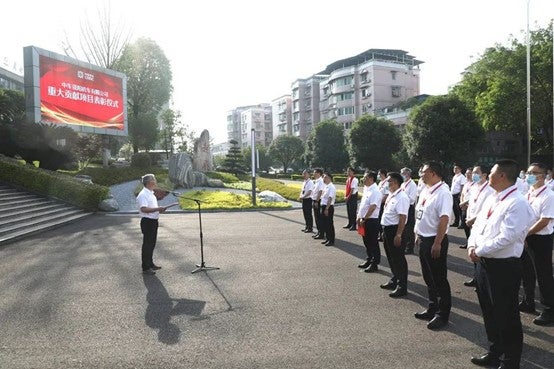 It is the beginning of summer on 5 May. Thriving on the present, each step deserves to be remembered.

At 8:30 a.m. on the same day, the company held a commendation ceremony for a major contribution project to commend the Overseas Business Department for successfully launching Turkmenistan locomotive orders, as well as its sales team, who has made outstanding contributions in the marketing work.

This is the second commendation ceremony for a major contribution project held by the company this year, aiming to enhance the sense of honour in marketing staff, and inspire them to make new achievements. At the same time, it motivates the staff from various departments to learn from the excellent team, achieve their goal, and successfully perform the reform and upgrading.

From 2004 to 2016, the company successfully provided 251 units of locomotives to Turkmenistan, becoming the country’s main locomotive supplier.

The signing of this project marks a new milestone in the cooperation between the two parties.

This is a major breakthrough made by the company’s marketing team in overcoming the impact of Covid-19, eliminating numerous difficulties, cultivating the Central Asian market, and expanding the international market. It is also helps company to implement the Belt and Road Initiative, and to boost the economic development of countries along the Belt and Road.

The marketing team, represented by General Manager of the Overseas Business Department Zhou Dingguo, became the most dazzling star of this commendation.

Chairman of the Board Chen Zhixin personally presented a festive red scarf to Zhou Dingguo and handed him atrophy and flowers. The leaders of the company took a group photo with Zhou Dingguo.

General Manager of the company Yang Wensheng presided over the ceremony.

The top management members of the company, the major project directors, all the mid-level managers of Overseas Business Department, the leaders of the relevant departments and profit centres, as well as some employee representatives, witnessed this glorious moment together.

Chen Zhixin, on behalf of the company, warmly congratulated the marketing team of the Overseas Business Department. He hoped that the marketing system would continue to work hard and reach a higher level, and he also hoped that all departments and units of the company would make a concerted effort to meet these achievements again. He proposed, “Let’s join hands to create a good situation that fresh orders will pour in and the company is developing well, just like fish in water!”

Zhou Dingguo, on behalf of the Overseas Business Department, thanked the company for the affirmation. He said that the mission of the marketing department is to sign more and better orders for the company while remaining true to the original aspiration and keeping the mission firmly in mind. The Overseas Business Department will persistently work hard to break into the markets, and encouragingly forge ahead to fight for the orders. He believed that more flowers of tomorrow’s victory can be watered by spilling the enthusiasm and sweat on the way of the company’s reform and upgrading.

Subsequently, the Company held a fish-releasing ceremony, which symbolised the good wish of “Fresh orders will pour in and the Company is developing well, just like fish in water”.

Zhou Dingguo put a koi representing good luck into the fish pond. Everyone applauded and congratulated each other.