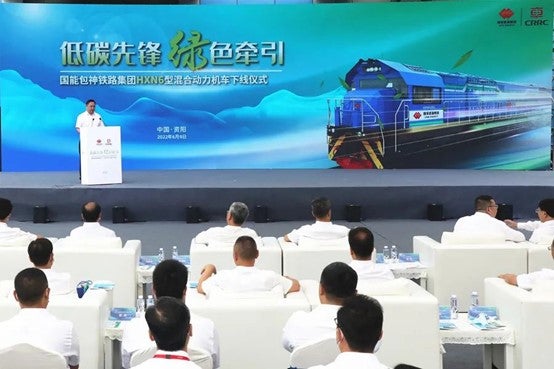 Tie Libin pointed out in his speech that CRRC Ziyang is visionary in taking the lead in developing green and environment-friendly hybrid locomotives successfully based on independent innovation, which is the decisive achievement, and has become the new peak of new energy rail transit equipment technology. In the future, he is confident that the HXN6 locomotive will run freely at ‘Green Acceleration’ on the 872-kilometer line of CHN ENERGY BAOSHEN RAILWAY GROUP.

Chen Zhixin pointed out in his speech that the off-line of the HXN6 hybrid locomotive for CHN ENERGY BAOSHEN RAILWAY GROUP marked the first commercial sales of this type of locomotive. This is a major measure for CHN ENERGY BAOSHEN RAILWAY GROUP in building a green and environment-friendly railway, as well as a milestone for CRRC Ziyang in the process of upgrading and promoting high-quality development. CRRC Ziyang will always insist on creating green, environment-friendly, and low-carbon locomotive products, and will contribute its wisdom to building a resource-saving, environment-friendly, and low-carbon-oriented society.

With gorgeous fireworks, the HXN6 hybrid locomotive with red ribbons slowly drove out with the horn sounding, becoming the most eye-catching star of the venue.

After the ceremony, the guests boarded the HXN6 hybrid locomotive on site and spoke highly of this green locomotive.

Based on the HXN6 locomotive R&D project, CRRC Ziyang has obtained 63 authorised and accepted patents for core technologies such as intelligent hybrid control, multi-mode power battery charging, and hybrid braking, among which there are 21 national invention patents. The company also takes the lead as a major member in developing a total of six power battery series standards for locomotive and DMUs traction, including those for power battery safety design, lithium-ion power battery tests, power battery management systems and power battery thermal protection systems, fundamentally ensuring the safety and reliability of locomotive power batteries.

As a representative fully responding to the global ‘Dual Carbon’ Strategic Objective, HXN6 hybrid locomotives can effectively replace traditional diesel locomotives, and it is powered by a ‘power battery pack’ and a ‘diesel gen-set’ with a preference to rely on the power battery pack.

The HXN6 hybrid locomotive has three major technical advantages with ‘good economy, outstanding effect of energy-saving and emission reduction, and friendly to the environment’.

According to the introduction from CRRC Ziyang chief engineer Li Xining, the HXN6 hybrid locomotive can reduce fuel consumption by 30% to 50%, reduce exhaust emission by 40% to 80%, and reduce noise impact time of the diesel engine by more than 80%. Taking a single locomotive as an example, it can reduce fuel consumption by 90 tons to 150 tons on average, pollutant emissions by three tons to five tons, and carbon emissions by 280.5 tons to 467.5 tons ever year.

In addition to energy conservation and environmental protection, the HXN6 hybrid locomotive also has a very strong traction performance. Under the shunting operation condition of a single-locomotive, it can haul more than 10,000 tons of cargo, which can fully meet the operating requirements such as hump pushing, formation, and whole train traction in large marshalling yards, as well as short-distance transfer services.

On the basis of the previous stage, CRRC Ziyang has upgraded the technology for these two HXN6 hybrid locomotives that have successfully rolled off the production line. It not only adds the high-safety liquid cooling power battery system, optimises and improves the diesel engine system, and the piping and and wiring process, but also re-optimises the process design for the locomotive appearance and interior, so that the performance and appearance level of these locomotives have been comprehensively improved.

It is reported that these two HXN6 locomotives will be sent to Inner Mongolia in mid-June to assist in achieving green traction of coal transportation shunting operations for CHN ENERGY BAOSHEN RAILWAY GROUP.