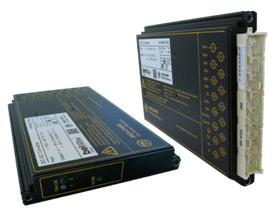 Equipment manufacturers of sub-systems for railway vehicles always face the problem that the voltage ranges of the supply systems on board differ depending on applications and regional rules.

Pursuant to the experience of Bel Power Solutions, many different nominal input voltages can be found between 24V and 110V, including the tolerances and spikes requested by the railway standards. In general, there is no need to combine different voltage ranges in the same application, however a wider input voltage range covering several rated battery voltages allows for substantial advantages regarding testing and approving of sub-systems.

Bel Power Solutions have developed new MELCHER products to satisfy this scenario. Traditional MELCHER series of DC / DC converters are split in up to six input voltage ranges, but the newest converter series exhibits an extremely wide input voltage range of 10 to 1. With different models and housings they feature up to 300W output power.

The HP Series complies with the railway standard EN 50155.

The HP Series represents the newest member of cassette style DC-DC converters. The housing is just 20mm wide and 100mm high. It offers up to four isolated outputs and up to 192W of output power. As standard, they comply with all requirements of the railway standards EN 50155 and include 10ms interruption time (Class 2), also with the requirements of fire protection on railway vehicles. The HP Series converters can replace the existing narrow input P Series models with identical pin assignment.

A special challenge for the design engineers was to include a programmable undervoltage lockout (PUL). Without this feature, a converter connected to a 110V battery would keep running down to 14V and discharge or even destroy the battery which is not acceptable. Due to the high input current, the start-up might trigger the external circuit breaker. That is why the switch-on / off trigger level is adjustable with an external resistor or an optional built-in rotary switch.

MELCHER products have been used for more than 40 years in railway applications. This Swiss Company was acquired in 1998 by Power-One and since 2014 is a part of Bel Power Solutions.

The HP Series converters offer up to four isolated outputs with an output power up to 192W.