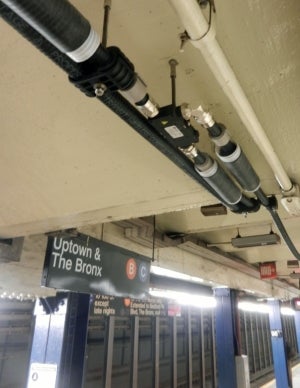 RFS Products Utilized in One of the Most Expansive Distributed Antenna System Networks Worldwide.

RFS products that will be used in the project include HYBRIFLEX conduit cable, transmission line cabling with low smoke, and zero-halogen jackets and jumpers.

The Transit Wireless NYCTA network, one of the most expansive distributed antenna system networks worldwide, will allow the use of a wide variety of mobile devices anywhere within the system with cellular and Wi-Fi coverage options, passenger access to expanding transit applications including service information, alerts and advisories, location-based applications consisting of rider awareness, local business support and E911, and commercial wireless services for public safety and security personnel. The system will also harness the potential to support additional NYCTA business applications.

"Transit Wireless chose RFS because the company was able to quickly adapt its products to meet the project’s specific needs," said William Bayne Jr., CEO at Transit Wireless. "As an approved supplier to the NYCTA, RFS has developed a solution that is readily deployable and scalable in this unique environment."

Several major wireless carriers have already signed on to become partners to the Transit Wireless Network. The multiyear project includes 277 stations, 30 of which are scheduled to go live by early 2013, including major stations such as Times Square, Rockefeller Center and Columbus Circle.

"New York City’s subway system is currently one of the largest – and one of the oldest – in the world. Coupled with the harsh subterranean environment, the project was particularly challenging," said Saeid Malaki, design & construction manager at Transit Wireless. "Using time-tested, reliable solutions from companies like RFS ensures that our designs meet the precise coverage, traffic and route requirements necessary for such a large scale and complex project."