RAIL.ONE Opens Factory in Iowa, US 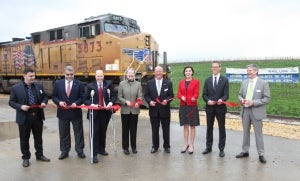 The RAIL.ONE Group, a world-leading manufacturer of concrete ties and system provider for rail-mounted tracks, has opened a new factory in Clinton, Iowa. Construction of the production facility began in 2013. In less than a year, one of the most modern concrete tie plants in the world came into being at a total investment of around $22m.

In the presence of numerous representatives from the world of politics and the economy, the Lieutenant Governor for the state of Iowa, Kim Reynolds, officially set in motion the new line for the production of concrete ties and symbolically sent a train on its maiden delivery voyage by cutting the red ribbon.

Along with the approximately 150 guests – including Union Pacific Railroad’s chief engineer, David Connell, and vice president of supply and continuous improvement, D. Lynn Kelley, Ph.D – chief executive officer Jochen Riepl greeted the Mayor of Clinton, Mark Vulich, and the chairman of the Clinton Regional Development Corporation, Steve Howes. A factory tour served as the kick-off for the opening event. The participants were able to get a good overview of the production of heavy-duty ties for North American freight traffic.

Along with its production locations in Germany, Romania, Saudi Arabia, Spain, Turkey, South Korea and Hungary, Clinton in the US is now the 13th production operation for concrete ties and non-ballasted track systems. In the factory, costing around $22m, 65 new jobs are being created in the region. In the future, the company will produce around 600,000 concrete ties per year in the new production facilities for the railway companies of North America.

"The plant in Clinton is one of the most modern production facilities in the concrete tie industry. That we are able today – after less than a year of construction time – to put it into operation is an unheard-of achievement for our team, to whom I am genuinely thankful," said Jochen Riepl, chief executive officer of RAIL.ONE. He continued: "Here in the USA with our know-how, we will set the standards for new technologies and for quality in the concrete tie industry."

"The plant in Clinton is one of the most modern production facilities in the concrete tie industry."

Kim Reynolds, Lieutenant Governor for the state of Iowa, also acknowledged the commitment of RAIL.ONE: "Iowa and Germany have always had a special connection. The descendants of German immigrants still make up the largest portion of our population at nearly 36%. So it’s just logical that there is a factory here – in the heartland of the United States – that combines German engineering with the American pioneering spirit."

Mark Vulich, the Mayor of Clinton, emphasized the significance of the new production facility for the future development of his home town: "The location of RAIL.ONE in Clinton shows that our town is an attractive location for international companies."

Steve Howes, chairman of the Clinton Regional Development Corporation, supported this viewpoint: "We want to create the ideal conditions for companies. With RAIL.ONE, we now have a global player in our midst which will create new jobs in our region."

D. Lynn Kelley, Ph.D, vice president of supply and continuous improvement at Union Pacific Railroad, also congratulated RAIL.ONE on the opening and praised the innovative spirit of the company: "We are excited about this facility and grateful to RAIL.ONE for bringing their concrete tie products to Iowa and Union Pacific. RAIL.ONE has a long track record of providing quality products with manufacturing plants around the world, from the Middle East, Germany, Asia and now Iowa, we are all very pleased this day has come."

With regard to quality, safety and manufacturing technology, the new factory meets the highest standards. This is also reflected in the results of concrete tie production. RAIL.ONE has developed a special type of HHS 36/6 heavy-duty tie. It meets both the demanding requirements of the American AREMA specification as well as the specifications of the European EN 13230 standard. With its new factory in the US, RAIL.ONE completes the first important step in supplying the large railway companies of North America with high-quality heavy-duty ties that are produced according to German technological and quality requirements. The new factory is one of the largest production locations of the RAIL.ONE group.