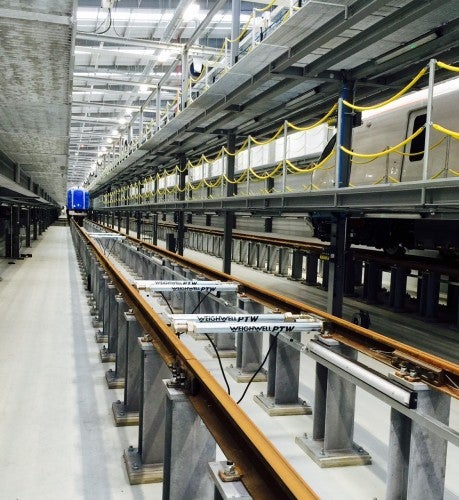 Weighwell has implemented a full train weighing system (PTW 500-VB2X) at Hitachi Rail’s Newton Aycliffe rail vehicle manufacturing facility. The portable system will weigh four axles instantaneously and this type of system has been involved in the testing of the Class 800 / 801 Inter City Express trains at RIDC Melton since early 2015.

The PTW 500-VB2X is a static train weighing system that comprises of four separate portable train weighers (PTW’s) and most importantly allows rail vehicles to be weighed faster than our single axle or bogie weighing systems. This ultimately provides greater repeatability and accuracy.

Our PTW’s provide the flexibility to weigh different car types (which have differing wheel to wheel and bogie and bogie lengths) without fundamental track modifications. In addition we were able to meet Hitachi Rail’s essential operational requirements and offer a package that enhances our ongoing relationship and provide a high level of service.

In September 1825, Robert Stephenson’s Locomotion No 1 was assembled and test runs began on what became the world’s first generation of passenger engines. Now only a few hundred yards away at Hitachi’s Newton Aycliffe train manufacturing facility the next state-of-the-art rolling stock for the British train network will now be built.

Hitachi’s rail vehicle manufacturing facility will manufacture the Class 800/801 as part of the Government’s £5.8bn Intercity Express programme (IEP) but also the AT200 for Abellio Scotrail. The world class £82 million facility will manufacture up to 35 vehicles per month and when fully operational will employ approximately 730 people with the first train scheduled to enter service in 2017.

Paul Horsfall, Managing Director commented: "the opportunity to help contribute our renowned industry know-how and help support the growth of one of Britain’s busiest intercity rail routes is a momentous and invaluable opportunity".

At Weighwell we aim to not just ‘sell a weighing system’ but provide a holistic package that seamlessly contributes to the customers supply chain and caters towards their specific requirements. For instance at Newton Aycliffe our PTW’s were manufactured with bespoke alterations and in accordance with Hitachi’s operational requirements. Specific changes were also made to our industry leading ptwX software.