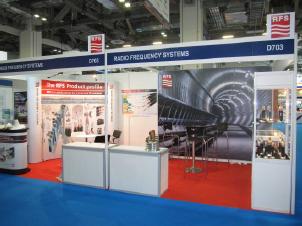 Radio Frequency Systems has announced that 2014 was another record-breaking year for deployment of its RADIAFLEX® and CELLFLEX® cables and related products.

RFS global product line director for transmission lines and wireless indoor solutions Peter Raabe said: "These and other projects in 2014 are excellent examples of the flexibility our cables, jumpers, splitters, connectors and accessories provide to operators around the world for in-tunnel and in-building wireless networking.

"With RFS solutions, operators have a variety of options to deliver wireless service wherever their customers are, and provide the quality of experience today’s end users expect at all times, whether they are sitting at a desk in an office, traveling through a tunnel on a metro train on their way to work, or enjoying a sporting event in a stadium."

Fans at the final match of the 2014 FIFA World Cup at Maracanã Stadium in Brazil had no trouble sharing the drama on the field and the experience in the stands with friends and family over the advanced, wireless, multi-operator Distributed Antenna System (DAS) solution provided by RFS.

Reports released by Sinditelebrasil and the Brazilian Ministry of Communications show that the multi-technology wireless network infrastructure provided by RFS supported a data traffic volume of 1.5Tb, equivalent to 2.6 million photos, with an average size of 0.55MB. Using mobile phones, smartphones and tablets, the 74,000 fans inside the stadium generated this traffic over a seven hour period, as well as 618.725 tweets per minute and 280 million posts on Facebook.

RFS in-tunnel and in-building wireless networking solutions will be showcased in booth D20 at the Middle East Rail tradeshow in the Dubai International Convention and Exhibition Centre, in Dubai, 17-18 March.