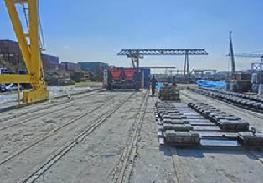 The new Gilon Tunnel will be equipped with a low vibration track (LVT) system. The tunnel is part of the new Akko – Karmiel line in northern Israel, and connects the costal railway line with the city of Karmiel.

Sonneville partnered with the precast manufacturer Solel Boneh as licensee of the LVT system in Israel and since the beginning of April 2015, they manufacture 40,000 LVT concrete blocks. Besides the know-how, Sonneville provides also the casting machine as well as the block pads and rubber boots for the LVT supports.

In the beginning of 2015 the casting machine was shipped from its recent installation in Taiwan to Israel and was set-up, maintained and powered-up by Vigier Rail / Sonneville technicians. After that the employees from Solel Boneh were trained in handling the machine and the entire manufacturing process of the LVT supports.

The installation of the supports in the Gilon Tunnel is expected to start in November 2015.