Living On The Rail? The Metro Superstructure Project 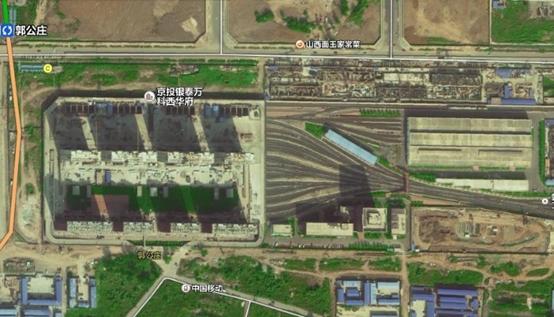 This is a Beijing local satellite image and shows Beijing Metro Line 9 Guogongzhuang depot, taken in 2016. Now just above the depot are built eight buildings with 17 to 26 floors. This metro superstructure project started in 2011.

The metro superstructure project uses the convenience of transportation depot or metro subway station to build commercial buildings above it, so to attract customers and promote the development. Say it simple that is carrying out development and construction of civil buildings over the terminus garage, which is higher than 9m-13m on the ground.

For the government, the short-term revenue, such as the secondary land transfer fees and the real estate sales taxes is huge.

For Beijing metro company, the Guogongzhuang station has become one of the most popular sites on the 9th line, effectively lifting the subway utilisation, reducing the operating costs and improving the convenience of the public life.

Due to the advantage of direct to a metro stop, these building’s price is about 20% higher than surrounding estate.

In Beijing, there are two more metro superstructure projects under construction. And in the whole China, at least 15 projects are going to start.

Compare to ordinary building construction, the biggest problem of the metro superstructure project is the vibration problem.

Vibration caused by the train does not make the structure security problem, but often offer discomfort feelings to the people in buildings, affecting their productivity and quality of life to reduce the applicable performance of buildings.

More turnouts in the curved throat area and the traveling speed is relatively high. The new car and the train after overhaul in the test line for system debugging and performance test speed is higher.

The both reason cause more vibration. In addition, these vibrations spread via track bed, column and platform to the building, causing vibration of structural components. A test in a Chinese depot shows, even when a train uses only 15km ~ 20km/h to go through, the vibration directly above residential buildings is very high as 85dB.

The depot preparing for superstructure construction widely used a thick cover with two to three parking floors between the track and the bottom of the housing, so that the distance between them increases to as much as possible to reach 20m or more, reducing vibration and noise reduction levels.

Measures may also be taken are the installation of sound insulation screen at the station, setting isolation sew at the connection of base and beam-column and filling asphalt rubber seam.

The No. 16 line of the Beijing metro is using a Sunrui elastic turnout fastening system GJ-6 with a 5-8 dB vibration reduction and FFU composite sleepers. Under the ballast is a fully laid rubber mat. Various methods are used in combination to maximise the damping effect.