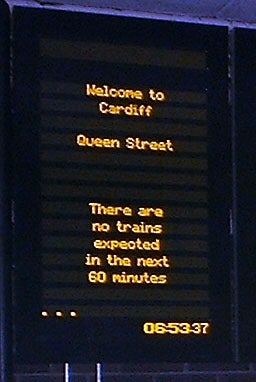 Infotec has designed and manafactured passenger information LED displays for two platforms at Cardiff Queen Street railway station. One of the platforms is new, while another has been restored after being put out of use in the 1970s.

The main hub of the Valley Lines network, Queen Street station is located at the eastern end of the city centre, and is the second busiest station in Wales after Cardiff Central. More than two million passengers use it each year.

A £220m improvement project to future-proof the Cardiff and Valleys rail network is being funded by Network Rail and the Welsh Government. It has seen the disused platform on its west side reinstated, and a new bay platform built on the east side for the Cardiff Bay shuttle service.

Infotec has provided an LED P1094 summary board and P1093 small-format next-train indicator displays for these platforms as part of the improvement project. Steelwork to support them has also been designed and supplied.

The displays for Queen Street are the latest to be designed and manufactured for stations in Wales by Infotec. Dozens of stations in the country have Infotec displays, with a good number taking advantage of text-to-speech, and using wireless technology to provide a consistently high level of passenger information displays, regardless of location.