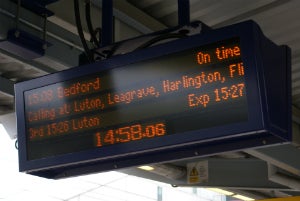 Ensuring every station on the Route has CIS was one of a number of changes announced when GTR took over the franchise in 2014.

This and a series of other measures are being implemented to deliver real improvements to passengers’ experience.

Almost 30 platform displays and a dozen summary displays have been manufactured and supplied by Infotec for 12 stations on the route. The work is part of a huge investment in the provision of real-time information.

Steelwork, much of it bespoke to accommodate particular structures and locations, has also been designed and supplied by Infotec as part of the £170,000 contract.

He said: "We’ve also been focusing really hard on improving the other elements that matter so much to our passengers, which is helpful, pleasant staff, cleaner trains and better service information."