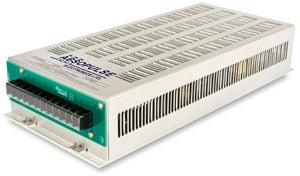 The high-frequency PWM inverters employ a new design topology and semiconductor technology that simplify the inverter circuitry, and enable compact construction on a single PCB at a more competitive price than previous versions of the same output power.

The CSI 500-FX series accepts a 125Vdc (105V-145V range), and delivers 230Vac at 50Hz. They are convection cooled and measure 153x66x358 mm. Both versions are rated for operation over a 0°C to +50°C temperature range at full load with no derating required. Wider temperature ranges are available on request. Efficiency is typically 80% at full load, depending on the input voltage required.

The inputs meet EN55022 Class A conducted and radiated requirements, with a Class B option available. Filtering on the input and output contributes to low noise. Comprehensive electronic protection inrush current limiting, and reverse polarity protection and current limiting with short circuit protection.

The CSI 500-FX and CSI 500F-FXW packages are designed for chassis mounting. The inverters can also be assembled on cradles with either 2Ux19in or 3Ux19in front-panels for 19in rack-mount applications.