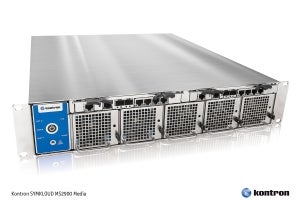 This translates into a new order of magnitude of efficiency. The Kontron SYMKLOUD Media platform will be able to handle massive distributed workloads of content delivery such as fixed and mobile video transcoding applications deployed in cloud infrastructure.

Changing demands in the broadcast industry are leading to an ever increasing pressure to explore IP, cloud options, as the viewing experience diversifies across interactive TV sets, tablets, plus on-demand and catch-up video services that are more popular than ever. One of the instrumental network elements in end-to-end distribution is the Encoding/Transcoding of video for all fixed and mobile devices. The market push is to move this portion into the cloud for all multi-screen deployments.

With the multitude of devices comes a multitude of different bitrates, resolutions and codecs. To transcode streams of audio and video from codec to another is compute intensive. The 4th generation Intel Core i7 quad-core processor is very well suited to decode and transcode simultaneous video streams with its GT3e graphics engines, thus freeing up the main processor for other tasks such as analytics.

Platform Efficiency – integrated switch, load balancer, and processors
As a platform concept designed from the ground up for the expandability, energy efficiency and low cost requirements of next generation data centers and cloud service providers, the SYMKLOUD Media platform uniquely integrates three key infrastructure elements in a 2U footprint – 10GbE Switching (Layer 4), and modular Load Balancer and Server subsystems.

With this combined approach, SYMKLOUD enables an efficient means to scale clusters across 42U racks, reduce or eliminate the need for top-of-rack equipment and 2x to 4x fewer fiber / copper cables, thus saving overall costs on IT and infrastructure.

Benoit Robert, Kontron Executive Director, Product Management, Communications Business Unit said: "As we have been introducing our SYMKLOUD Media platform dedicated for video transcoding based on the previous Intel processor version, channel density is a primary driver for building a cost model. In other words, how many supported channels per 2U will dictate the deployment model of our customers using the Intel Core i7 quad-core processor. With the SYMKLOUD platform now supporting the 4th generation Intel Core processor, our customers can obtain a much higher channel density for video transcoding on the GPUs, without ever utilizing the CPUs in the 2U platform."