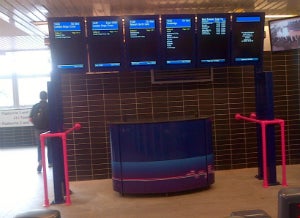 Customers at Hatfield, Stevenage and Finsbury Park railway stations are now able to see customer information displays along the length of the 12-coach train platforms, thanks to work involving Infotec Ltd.

Designs, displays, brackets and engineering services were all provided by Infotec, for what was the last scheme completed for First Capital Connect before its franchise came to an end.

Department for Transport financed through the Customer Information Improvement Fund, the contract saw 123 displays installed in a period of just nine weeks. Fone Alarm Installations Ltd. (FAI) was the installer.

The aim was to both replace life-expired screens and to increase their numbers, thereby enhancing the stations’ systems. As an example, ahead of the work Finsbury Park only had two screens on each platform, but this was doubled to four.

With the introduction of 12-coach trains, this enables customers to use the full length of the platforms and still get information. Additional screens were also put in all waiting rooms; at Finsbury the number went from 23 to 59.

Hatfield platforms 2 and 3 had no screens at all and now have four each, Stevenage had no passenger information displays around its three different entrances, all are now covered with screens.

Paul Cooper, CIS delivery manager for Govia Thameslink Railway which now manages the three stations, says: "It was a challenge to say the least, with engineering designs, structural surveys, landlord consent and physical install works as well. I set both Infotec and FAI the challenge and they delivered 100%.

"We didn’t just install the screens, we rewired the whole stations for CIS, so introducing new data and power cables across all three stations with dedicated circuits solely for CIS, something we have never done before.

"Feedback from customers has been excellent all round, pretty much wherever you go on the stations now there is a CIS screen."