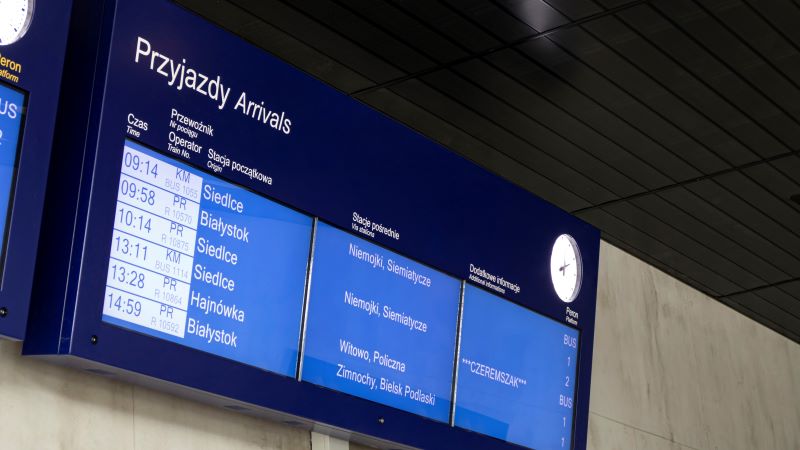 For many consecutive years, the Dysten company has been specialising in both the design and production of innovative electronic solutions for passenger information systems, designed with the railway industry in mind. The continuous digitisation, combined with the need to increase both the efficiency of transportation and passenger comfort, are key factors influencing the development of the offered technologies. The company has been closely cooperating with the national railway industry since 2015. It has been gradually developing, providing new solutions, and expanding its portfolio.

Solutions for the railway-related infrastructure

The very beginning of Dysten’s operation in the railway industry is strictly connected with the provision of a local passenger information system, based on Collective Passenger Information Displays, that was developed on the basis of LED-based backlit LCD matrices. The system in question was installed at the Cracow – Płaszów railway station. Another project realised for Polish State Railways was the Local Passenger Information System for the Kędzierzyn-Koźle railway station.

In 2017, Dysten decided to participate in the pilot project organised by the Polish State Railways entitled “Innovative System Stations”. The undertaking was oriented towards the demolition of the existing railway station-related facilities in order to build new, smaller, and more ecological ones. The concept of the project resulted from the fact that the modernisation of the railway station, and its adaptation to the expected functionalities, was much more expensive than the construction of a new facility. The investment assumed the utilisation of energy-saving solutions and latest technologies. As a part of the project, Dysten provided passenger information displays for 60% of the system stations constructed. The company showcased a remarkable flexibility, adapting products to strictly defined conditions and installation-related capabilities, meeting the designer’s concept and the guidelines of Polish State Railways.

Yet another project executed by the Dysten company was the provision of 22 passenger information displays for the stops owned by the Pomeranian Metropolitan Railway. The unconventional and innovative railway stops were equipped with perforated shelters, granting unusual lighting effects thanks to sun rays penetrating them. Glass covers were also installed to protect travellers from both wind and rain. All the stops were comprehensively adapted to the needs of blind and visually impaired passengers, offering them a notable number of amenities.

Electronic passenger information displays provided by Dysten not only show train departure times, but also timetables for nearby public transportation means. It is a significant convenience for people travelling by various means of transportation.

Dysten is one of a few Polish companies meeting the detailed guidelines on the executive elements of the Central Dynamic Passenger Information System and the accompanying infrastructure IPI6, developed by National Railways.

The first project realised that met the requirements of the regulations in question was a set of railway passenger information boards for the station in Radom , delivered by Dysten. In total, the company provided 80 devices. Platforms were equipped with platform edge displays incorporating analogue clocks, free-standing info kiosks, and totem-like boards for arrivals and departures. Furthermore, train presence sensors were installed. In the underground passages, next to entrances to the platforms, entry platform displays and station collective boards were installed to inform passengers about both the arrivals and departures of trains.

In 2021, the Dysten company provided railway displays as a part of the Dynamic Passenger Information System to the management of the train station in Bialystok , in compliance with the provisions of the IPI-6 guidelines.  As part of the contract, the company provided free-standing and wall-mounted devices such as:

The project of renovation and modernisation of the railway station in Bialystok has been the biggest investment realised by National Railways within Podlaskie Voivodeship, and one of the key initiatives implemented under the 2016-2023 Railway Station Investment Program, being partially funded from of EU funds reserved within the Connecting Europe Facility (CEF). The Bialystok station is the main railway node of the Podlaskie Voivodeship and at the same time, an important part of the international Warsaw- Bialystok- Vilnius- Petersburg railway line, which is in turn a part of the E-75 Rail Baltica railway line.

Currently, 80 facilities, such as railway stations and stops, are equipped with Passenger Information Systems provided by Dysten.

The Dysten company is a part of the Polish Chamber of Producers of Railway Equipment and Services , which connects reputable business entities developing solutions for the railway industry. Due to the fact that Dysten obtained the Quality Management System in the Railway Industry IRIS (ISO / TS 22163)  certificate, the company’s products have also been remarkably popular on foreign markets. The IRIS certificate is a reliable and objective proof of meeting the detailed requirements of the international railway standard by the Quality Management System implemented within the company. In addition, the devices offered to customers obtained a certificate of compliance with TSI PRTM and were approved by PSR PLK for being products meeting the requirements of IPI6. Said fact was confirmed by:

Development plans in the area of railway infrastructure

The Dysten company is preparing for the implementation of Dynamic Passenger Information Systems on subsequent sections of the Rail Baltica line, which is to connect Germany, Poland, Lithuania, Latvia, Estonia, and Finland. The comprehensive modernisation of the route in question will allow it to meet the standards of railway lines in European Union countries. Dysten is also realising tasks related to the investment of PSR Polish State Railways/National Railways called “Improvement of the E59 railway line, Poznan Główny – Szczecin Dąbie section“, co-financed by the European Union from the “Connecting Europe” (CEF) fund. The company, being a subcontractor of the discussed project, will deliver, install, and set up Dynamic Passenger Information System-oriented devices in accordance with IPI-6 guidelines.

Dysten has been engaged in talks with international partners and has been seeking participation in projects related to railway infrastructure supported by the European Union’s Connecting Europe Facility ( CEF ) initiative, which aims to support infrastructural projects from the fields of transportation, energy, and information technology.

Dysten has a remarkable experience when it comes to both the design and production of electronic devices for small and large railroad projects. All the offered products are manufactured in accordance with Polish guidelines. What is more, the company has the ability to manufacture devices in accordance with the individual requirements of the recipient. Dysten integrates the available systems, creating new solutions that increase the efficiency of rail transport and improve travel comfort.