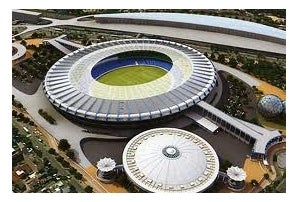 The 80,000 fans expected in each match at the legendary Maracanã Stadium in Rio de Janeiro during the 2014 FIFA World Cup will be able to share the experience with family and friends over a new multi-operator, multi-technology network infrastructure enabled by Radio Frequency Systems (RFS), the global wireless and broadcast infrastructure specialist.

RFS cabling, antennas and accessories have been installed in Maracanã Stadium to support the expected volume of fan communications during the seven games that will host the World Cup, including the Final.

The sophisticated distributed antenna system (DAS) solution in the Maracanã is built with state-of-the-art indoor wireless network products manufactured at the RFS plant in Brazil, including RF coaxial cables, the revolutionary HYBRIFLEX™ hybrid cable, indoor and outdoor antennas, and accessories. It also includes optical and RF solutions from Axell Wireless, a RFS business partner. The complete network will simultaneously transmit 2G, 3G, 4G (LTE) and iDEN technologies to support five Brazilian operators with coverage in all public areas at all times.

"The success of this event will be judged on more than the final outcome of the matches," said Marcos Wrobel, RFS commercial director for Latin America.

"When more than 80,000 fans take their seats in Maracanã Stadium to watch a match, they will want to share the experience by posting pictures to social media sites, sending messages or by simply calling their friends and family who aren’t there. This will generate a huge volume of wireless traffic. We have designed a multi-technology, multi-operator indoor network for Maracanã Stadium that will provide instant access for all fans, and ensure that all traffic is communicated quickly and efficiently for all mobile operators providing service at the games."

The use of HYBRIFLEX cables has delivered a cost-effective infrastructure solution to the Maracanã and simplified network deployment and installation. HYBRIFLEX combines optical fiber and DC power for remote radio heads in a single, highly flexible, corrugated cable that can be easily grounded. This integrated cabling solution replaces traditional multi-cable approaches, which require additional infrastructure components, long site installation times, difficult implementation accessories and training for installers who must work with the delicate optical fiber.

In addition to infrastructure products and solutions, RFS also provided complete turnkey services for this deployment.

"RFS has delivered many successful shared infrastructure indoor networks, not only in stadiums but also in the most varied environments," added Wrobel.

"Each venue presents a different set of challenges due to its structure and network needs. We knew that the Maracanã project would be particularly challenging because of the structure and design of the legendary stadium, and that it would not be easy to implement a multi-technology and multi-operator network that provided optimal signal distribution. But we considered the specific environment characteristics of the stadium during a game day and the fact that fans are seated and static rather than moving when they are using their handset, and designed the best network for this requirement."

Rio’s Maracanã Stadium has hosted the largest audience in the history of soccer (Brazil vs Paraguay in 1969, approximately 200,000 people), the 1,000th goal by Pelé, the 1950 World Cup and the Pan American Games in 2007. It has also, hosted unforgettable shows by a variety of artists, including Frank Sinatra, Madonna, Paul McCartney and the Rolling Stones. In 2016, the Maracanã will host the opening and closing ceremonies of the Olympic Games.