France has taken a bold step to ban domestic short-haul flights; a move that will reduce the carbon emissions from aviation in the country. In this issue, we look at how the French high-speed rail network is perfectly positioned to take on the demand of these passengers shifting from air to rail; and how efforts to make a modal shift across Europe have ramped up recently.

Elsewhere, in Ukraine, the war continues. six months on from Putin’s invasion in February, we look at how the rail sector has been impacted by the conflict as we timeline the sanctions that have impacted passenger and freight operations in the surrounding region.

We also learn about how Blickfeld’s LiDAR technology is being used in a research project looking into shunting assistance systems for freight, profile a new Bluetooth solution being rolled out in Belgium to track train positions instead of GPS, and speak to CKDelta about the deployment of data-driven solutions in the rail industry – and why a sustainable rail infrastructure requires new data solutions. 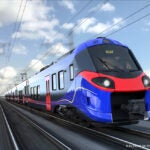 France has implemented a ban on domestic short-haul air routes that could be travelled via train in under two and a half hours. According to Peter Nilson, the decision is only made possible by the country’s history of investment in high-speed rail.

A SAMIRA research project looking into shunting assistance systems for freight has turned to Blickfeld to use the firm’s LiDAR technology in the project. Jasleen Mann reports.

How sanctions are impacting Russia’s railways

Military activity and sanctions imposed as a result of the Ukraine–Russia conflict have had a significant impact on passenger movement across the Ukrainian and Russian rail networks, as well as in and outbound freight. Andrew Tunnicliffe looks at what has happened thus far.

A new train-tracking solution, using Bluetooth technology, will be rolled out at select stations on the Belgian railway network. Jasleen Mann profiles why the choice of Bluetooth over traditional GPS systems is beneficial.

Jasleen Mann speaks to Geoff McGrath, managing director of CKDelta, about the deployment of data-driven solutions in the rail industry to tackle contemporary challenges in an increasingly volatile market, while maintaining customer experience.

The current global energy crisis threatens to cause huge instability for businesses across all sectors, including rail. Recent reports in the UK have shown that Network Rail could be hit with a £1bn electricity bill due to spiralling costs, and the cost of running diesel-powered services will also no doubt be affected.

After a summer of strikes and timetabling shake-ups, passengers are already faced with the prospect of losing staff from ticket offices, and with rumours that rail services could be axed to ‘ration energy’, the future looks uncertain. We look into the matter in our next issue.