Communication across the 250 miles of London Underground’s track is essential to those working in the rail sector to ensure safety and lack of disruption for passengers, and to run safety protocols.

Every train driver, every train and every station within London Underground is connected by the communications network, Connect, to always enable communication between employees. If this connection is broken or facing issues, trains are unable to leave platforms on time, stations close and the safety of passengers and staff is at risk.

Thales has recently completed an upgrade of the Connect system, which sees the system running the most up-to-date technology available to the industry.

Thales staff have been working on replacing this technology for the past two years, removing the old legacy equipment and installing the new technology. The upgrade took place while London Underground continued to operate which presented challenges for the team. Thales programme director Peter Gaylor explained these challenges and how the system works. 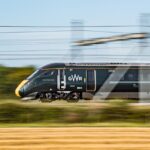 Frankie Youd (FY): Why was the refresh of London Underground’s communications network needed?

Peter Gaylor (PG): Thales started the relationship with Transport for London on this project back in 1999, and that was always going to be a 20-year period for us to design, build and operate the network with the London Underground. You can imagine what’s gone on in computing and technology in general over the last 20 years; for some of this kit to have been around in those locations, it’s coming to the end of its life.

London Underground are quite keen to make sure that what they’re installing now has a lifespan that’s taking them into the foreseeable future. When the contract was awarded to us in 2019, we agreed that as part of that contract we’d upgrade the network. It’s [now] upgraded to the latest terrestrial trunked radio (TETRA) technologies.

The technology that we’re talking about now, the basic technology hasn’t changed, it’s still TETRA and what was installed is the latest hardware or software to support that. So, for our customers, it’s less about the bells and whistles that you see with the 4G and 5G.

This technology is available and reliable, it works when you need it the most. That’s what’s really key to our supply, so it’s not the most glamorous technology in the world, but you know if you press the button to talk to somebody is going to work, we guarantee.

FY: How often is this technology scheduled to be replaced?

PG: The technology has a roadmap in terms of hardware; this is it really for the next 10 years, we won’t be changing any hardware. There will be continued reviews as we get with all technology and software, it’s continually being reviewed.

We’re continually introducing new features, new functionality, [and] they tend to come out once or twice a year. So those will be going on in the background overnight for the next 10 years or so, that’s just the business how we manage on a day-to-day basis.

FY: How does Connect work within London Underground?

The next step is the train communications, the ability for station staff to potentially talk to drivers, the drivers to be able to talk to dispatchers so that if a station is closed for an hour for example because of a fire alarm or person on the track then the communication between the dispatcher, train, the operators, and the station staff can all take place.

FY: What challenges presented themselves during the installation?

PG: There’s been many, many challenges, it’s taken us two and a half years to get to the position where we are today. We haven’t had the luxury of switching off the old network. If you were doing this for any other business, you would switch off the old network and rip it out, you’ll clean everything up, put the new kit in, you’ll commission it and then you’d hand it over.

We’ve had to integrate the two networks at the same time so that means physically installing new infrastructure. Stations aren’t the easiest thing to install the racks and cabinets, and there’s not many goods lifts in these locations. So, transporting and installing a lot of this kit has really been a challenge.

Then you throw in the pandemic as well and try to limit the amount of time that we have people working in the same locations, having to wear masks, all the testing. There’s been a lot of challenges just from physically installing the technology, parallel running it, commissioning it, and the people element as well.

FY: Thales has been awarded a contract to continue upgrades until 2023, what will this involve?

PG: We’ve just finished the core radio element and that’s the servers behind the network, the brains of the network. We’re currently upgrading the dispatchers, so that was also awarded at the same time. So, all the dispatcher locations around the network are being upgraded at the moment with the latest technology.

We’ve just commenced the upgrading of the base stations, so that’s the radio infrastructure. We’ve got 300 of those that we will be upgrading between now and 2023, that’s the next thing we will be celebrating.

FY: Is there anything else you would like our readers to know?

PG: I would ask readers to do their research around Thales. Thales is a global organisation that is very, very widespread and has an impact on everybody’s lives in ways that people probably don’t really appreciate.

Thales has a huge presence, and I would advise people to do their own investigations, Thales reaches and innovates in a number of spaces that people probably aren’t even aware of.