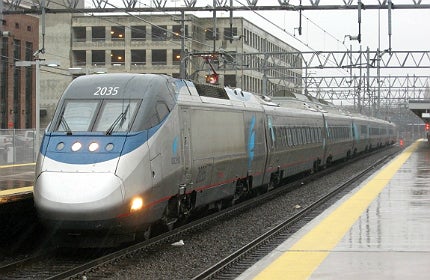 Compared to other European countries such as France and Spain, the UK has so far only dipped its toe into high-speed rail development with the High-Speed 1 link from London to the UK end of the Channel Tunnel.

The £32bn line, being developed by HS2 in partnership with CH2M Hill, will initially run from London to Birmingham (completion due in 2026), with a later extension taking the line to Manchester in England’s north-west and Leeds in the north.

The Argentinean capital of Buenos Aires suffered an unprecedented rail disaster in February this year when a train arriving at Once station on the Sarmiento line smashed into the platform barrier, killing 51 passengers and injuring more than 700 others.

City authorities said the crash could have been caused by faulty brakes, but the government announced a major investigation to find out the exact causes of the crash.

In North America, the US Department of Transportation announced that it had recommended spending $2.2bn to begin or advance the construction of 29 rail, bus and rapid transit projects in 15 US states. The projects are included in the country’s 2013 budget and form part of the government’s commitment to improving infrastructure.

March brought with it another major rail disaster, this time in Poland, where the collision of two trains just north of Krakow killed 16 people and injured nearly 60.

The crash occurred after a train ended up on the wrong track in the midst of ongoing maintenance work on the Warsaw-Krakow rail route. The tragic incident was of particular concern to Poland as it was about to host a massive influx of rail travellers for the Euro 2012 football championships.

In India, meanwhile, massive investment on rail infrastructure expansion continued apace, with Indian Railways announcing that it would invest $147bn to launch and improve services during the five-year plan period running from 2012 to 2017.

California is still in the midst of pushing through the first major high-speed rail project in the US, with a high-speed route that would eventually run from San Francisco in northern California to Los Angeles and San Diego in the state’s south.

A previous plan was deemed too expensive, however, and the California High Speed Rail Authority (CHSRA) was forced to submit a new plan that cut costs by around $30bn, down to $68.4bn.

The new plan was approved later in April, but the project still has work to do to secure full funding and convince Californians that this major expenditure will be worthwhile.

May: Network Rail to carry out £2.3bn Crossrail surfacing works

The Crossrail project in London, UK, is Europe’s largest construction project, involving the construction of a 118km line running from west to east London through an underground section passing through the centre of the city.

Construction works on the line have been ramping up in 2012, with Network Rail announcing in May its £2.3bn responsibility to carry out major ancillary infrastructure improvements and surface works, to ensure a smooth service when the line starts operations in 2018.

High-speed projects also began to move forward with their early stages in the UK and California. HS2 hired Parsons Brinckerhoff to start design work on the high-speed line between London Euston and Birmingham, while California began work on environmental impact studies for the first stage of its own high-speed project, which will run from Merced to Fresno.

The Government of New South Wales in Australia announced an allocation of A$9.8bn for public transport in its 2012-13 budget, including a total of A$4.7bn for the North West and South West Rail Links, both of which involve major extensions to Sydney’s commuter rail infrastructure, improving links between the city centre and important surrounding suburbs.

The projects are intended to help meet increasing public transport demand in the region and mitigate the problems caused by congestion on Sydney’s roads.

July proved to be a busy month for major rail investment announcements, especially in the US, where Amtrak revealed a hugely ambitious $151bn plan to expand capacity and increase speeds on the economically vital Northeast Corridor, including spending up to $7.5bn on an overhaul of Washington Union station.

The plan has been criticised as unrealistic by critics, but Amtrak president Joe Boardman said the investment was the best way to tackle the capacity crisis that is facing the rail corridor.

The UK announced a comparatively measly but more likely investment of £9.4bn into rail improvements across England and Wales, with funding going towards projects such as Crossrail, Thameslink, the Northern Hub and widespread electrification schemes.

In a historic victory, UK rail operator FirstGroup won the right to operate the UK’s West Coast Main Line (WCML) franchise in August, unseating Virgin Trains from a contract it had held since 1997. It was a huge win for First Group, which Virgin Group founder Richard Branson immediately criticised as financially unsustainable.

At this point, no one was aware of the huge ramifications that this contract award would have for the UK Department for Transport, which would be rocked to its core during the coming months.

Meanwhile, Brazil revived its plan to build a $16.5bn high-speed rail link between the cities of Sao Paulo, Rio De Janeiro and Campinas after several failed attempts to attract bidders to the project in the past. With challenging terrain and little domestic expertise in Brazil, the country still faces an uphill struggle to get this massive project off the ground.

As well as building high-speed rail lines at a rapid pace, China is also investing heavily in metro rail projects for its major cities. In September, the country announced that it would be investing $127bn to develop 25 urban rail projects in the cities of Shijiazhuang, Taiyuan, Lanzhou, Guangzhou and Xiamen, along with five projects to expand and improve the Shanghai metro. China is aiming to have metro systems in 40 cities by 2020.

But the month also saw the final nail hammered into the coffin of the Sydney monorail, an elevated transit system launched in 1988 that failed to integrate with the city’s public transport network.

The New South Wales government has invited bids to remove the monorail infrastructure, and its last service will take place on 30 June 2013.

After Virgin launched legal action against the UK Department for Transport (DfT), the West Coast Main Line contract awarded to FirstGroup in August was cancelled at the beginning of October due to deep flaws in the department’s franchise bidding process.

The short-term fate of the WCML was up in the air until the DfT awarded a temporary contract extension to original operator Virgin, allowing the company to continue operating the line for nine to 13 months, while the government investigated the competition problems.

The UK’s Crossrail project continued to tick over on schedule, however, with a tunnel boring machine called Elizabeth preparing to continue major drilling work for the line’s underground section in east London. The tunnels between Royal Oak and Farringdon are due to be completed in late 2013.

Superstorm Sandy, which battered the US East Coast at the end of October, dominated the headlines in early November. Although the storm caused extensive damage and flooding in New York’s rail system and subway tunnels, the Metropolitan Transportation Authority (MTA) was widely praised for its preparation for Sandy, as well as its recovery efforts in the storm’s wake.

MTA, as well as national rail operator Amtrak, which runs services in the area, steadily addressed the flooding in tunnels underneath the East River and Hudson River, gradually reintroducing services and increasing frequency.

The cost of repairing the damaged caused by Sandy is thought to be more than $50bn, but it would have undoubtedly been higher if not for the sensible precautions of authorities like the MTA.

Topping off the UK DfT’s chaotic 2012, a little stability was finally restored to the beleaguered West Coast Main Line franchise in December, when Virgin Rail Group was awarded an extended interim contract to run the WCML until November 2014.

The 23-month contract is intended to allow the DfT enough time to put together another long-term franchise bidding process, and can be shortened by up to six months if the system is put in place sooner than expected.

The news followed the publication of a major inquiry into the DfT’s WCML bidding process, led by Centrica chief executive Sam Laidlaw. The report noted a number of serious flaws in the process, although it did not recognise any institutional bias against Virgin at the DfT. The department is now setting about bringing its franchising programme back up to speed and salvaging its damaged reputation.