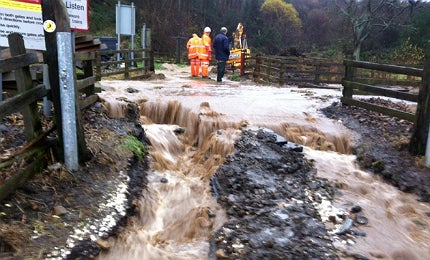 Severe weather events, such as tropical cyclones and subsequent flash flooding, possess the potential to wreak havoc on rail infrastructure. Incidents of trains being unable to run on flooded lines may be more common, but an increasing number of landslides bear the potential to be far more disruptive.

The implications of service disruption can be severe for both public and commercial sectors, as evidenced by flooding on rail lines across the world in the last three months.

Torrential rain in November 2012 saw widespread flooding and disruption to several main arterial railways in the UK, such as the East Coast Main Line, while around 100,000 train minutes are lost each year due to flooding in Scotland alone, resulting in compensation totalling in excess of £3m being paid out to dissatisfied customers.

Flooded railways are, however, not a problem restricted to the UK. Tropical Cyclone Oswald battered Australia in January 2013, causing sections of the Blackwater rail system in Queensland, which is crucial to the transport of mined coal, to flood. Repair works on the line are estimated to cost between AUS$10-15m, while lost coal volumes during the period – around four million tonnes – are equivalent to approximately AUS$22m. Hurricane Sandy made headlines as it made landfall in October 2012, flooding New York’s iconic subway.

Response to service failures as a result of November’s flooding in the UK was swift. Exeter MP Ben Bradshaw bemoaned how the UK’s West Country was effectively cut off from the rest of the country in the aftermath. Demands were made for Network Rail to improve the resilience of the west’s rail connections, and Network Rail responded in kind.

Network Rail published its strategic business plan for Control Period 5, comprising the five years between 2014 and 2019, on 8 January 2013. It contains details relating to planned investment from Network Rail to address several issues, one of which is disruption to services caused by flooding.

Network Rail chief executive David Higgins said: "The damage that extreme weather can do to a Victorian rail network which was neither designed nor built for such challenges is clear. Whole lines were closed by flooding and tracks came close to being washed away by rivers which burst their banks. On the worst affected parts of the network, torrential rain caused up to sixty landslides in a single day."

Higgins also highlighted how this specific area has been neglected in previous years, adding: "We are playing catch up on decades of under-investment. Nowhere is this more apparent than with the embankments, cuttings, bridges, tunnels and other structures, which have struggled to cope with extreme weather, alongside the burden of carrying more passengers than they were designed for."

The report states that drainage management has historically been carried out on a reactive basis, with issues being rectified as and when they occur, rather than preventative works being conducted. While this may have been understandable when extreme weather was less common, the increasing number of incidents of localised flooding in recent years would suggest there is a need for improved drainage to be installed, to prevent further service outages.

"Hurricane Sandy made headlines as it made landfall in October 2012, flooding New York’s iconic subway."

Between 2014 and 2019, new drainage will be installed and drainage inventory additions will be made, supported by surveys conducted by Network Rail. Routes will be prioritised by their criticality however, meaning that routes deemed to be more important may receive drainage works ahead of those at a greater risk of flooding. Earthworks will also receive a much-needed boost within CP5, with an investment of around £30m per year within the period.

Additions to Network Rail’s inventory throughout that period could take the form of further Aqua Dams, which were used by Network Rail to protect tracks in Exeter during the worst of the flooding in November 2012. The system uses surrounding water to inflate polyethylene liners, with the resulting pressure and mass forming a barrier preventing the flow of water. The systems have been used to divert streams in the past, but Network Rail achieved a degree of success in using them for flood water control.

Aqua Dams successfully prevented flood water reaching a crucial signal box on the Paddington to Penzance line near Exeter. However one such dam was flooded itself, further along the line at Cowley Bridge, with flood waters reported to have bent and twisted tracks.

Flood waters soon subsided, leaving Network Rail with a clean-up job to restore rail services. Issues have arisen in other parts of the world, where waiting for waters to subside has not been an option. When floodwaters stream in to enclosed tracks, like New York City’s subway, how can services be restored quickly and efficiently?

"Earthworks will also receive a much-needed boost within CP5, with an investment of around £30m per year within the period."

In the wake of Hurricane Sandy, entire neighbourhoods were deluged with water and large stretches of New York City’s subway were found to be almost entirely submerged. For services to resume, tunnels needed to be cleared of floodwaters, and New York’s Metropolitan Transportation Authority (MTA) readied the Pump Trains.

The Pump Trains are formed of four cars, with the front car containing three diesel-powered pumps targeted at draining water resting on the surface of the line. The three pumps are capable of removing a combined 1,500 gallons of water each minute, funnelling the water through three ‘reach’ cars. All three cars are fitted with an 18 inch metal pipe that transports the water, and are connected to each other using fire hoses, allowing the Pump Train to navigate corners. 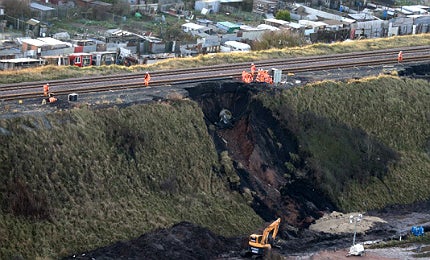 Flooding also caused landslides, like this one in Hartlepool

The last car contains a diesel engine that pushes the equipment through the tunnel, with the water carried through ventilation vents using fire hoses, funnelling the water into New York City’s storm drains, which flow straight into the Hudson River. The Pump Trains were first used in the wake of the 9/11 terrorist attacks, when the collapse of the World Trade Center towers caused water to flood into certain New York Subway lines.

With freak weather events becoming more prevalent and the UK’s water table continuing to rise – London’s flood defences at the Thames Barrier were raised a record number of times during 2012 – it may not be too long before Pump Trains are needed on London’s Underground.

The SECUREMETRO project brings together experts from across Europe to design a new generation of inherently secure, blast-resistant and fire-safe metro vehicles.