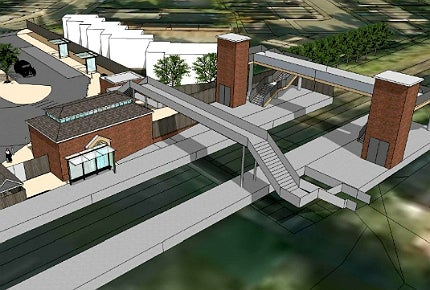 With austerity measures affecting most if not all public bodies, the UK Department for Transport is tasked with providing a comprehensive service as cheaply as possible. With the number of people reliant on public transport growing, initiatives that hold the potential of saving vital finances that can then be diverted towards providing transport services cannot be ignored.

In May 2013, statistics compiled by transport consultants Steer Davies and Gleave and published by the Office of Rail Regulation revealed that, of the stations that comprise the UK rail network, some were chronically underused.

Ten stations had less than 100 visitors in the 12 months ending March 2012, with Teeside Airport receiving just 14 passengers; four less than the 18 that visited during the previous year.

With just 14 passengers visiting the station per year and trains incurring certain costs with stopping at stations, Teeside Airport could easily be seen as an unnecessary expenditure on an already-squeezed rail network. Could there be a business case for closing particular stations down, owing to the results of feasibility studies?

Teeside too empty to open

"Teeside Airport could easily be seen as an unnecessary expenditure on an already-squeezed rail network."

While ten stations recorded less than 100 visits, Teeside Airport’s paltry figure of 14 understandably grabbed headlines. The station, located in Darlington, is located directly alongside the A67, but there is no access to the station from this road.

Intended users are forced to, perhaps conversely, drive through the airport to get to the train station. In the wake of the findings, the airport’s owner – the Peel Group – called for improvements to the station and improved accessibility.

The problem with Teeside Airport, however, may be more symptomatic of changes in employment and residential statistics in the area. Railway Consultancy managing director Dr. Nigel G Harris explains that the airport itself was a former military airport, and the barracks on site were later used to house students at the nearby university.

At that time, the station was busy. The construction of purpose-built student accommodation and the introduction of airport safety laws post-9/11, enforcing a two kilometre walk between the station and airport terminal building, has by all intents and purposes rendered the station somewhat obsolete. A bus-link running to and from Darlington has been serving the airport, further detracting from the rail station.

Other stations have witnessed poorer traffic than previously recorded owing to similar developments, such as Maidstone Barracks, which saw passenger levels fall 26% between 2010/11 and 2011/12 as demand moved to Maidstone West and other nearby stations as a result of the adoption of HS1 services. It stands to reason that HS2, when complete, could have similar effects on other stations.

A business case for closures

If demand drops below a level that is economically sustainable, could the stations’ futures be called into question? "There is a small number of stations where there may be a business case for taking them away," believes Harris, explaining that demand and revenue forecasting can be used to highlight problematic stations.

"Could there be a business case for closing particular stations down, owing to the results of feasibility studies?"

Issues also arise with how stations are vehemently protected by the UK Government, particularly in cases where rural communities are served. If rail links are the only way of accessing a town without four-wheel-drive vehicles, then it would be considered perfectly acceptable to prop up such a station financially.

"You have to prove to an independent body that no hardship will be felt as a consequence of a closure," states Harris, adding: "The key is identifying stations that are reasonably quiet, and those that are unreasonably quiet."

Forcing station closures is understandably unpopular, particularly after the so-called ‘Beeching Axe’ of the 1960s. During the nationalisation of the UK’s railways, swathes of rail networks and stations were closed under Dr Richard Beeching’s recommendations. Although the majority of his recommendations were rejected by the government, between 1955 and 1975 some 4,000 stations had been closed, with 2,000 remaining open.

It is only now that some stations that were closed as part of the Beeching Axe are being afforded the chance to re-open. In January 2013, the UK Government established a £20m fund to cover 75% of the building or renovation costs of such stations, providing they met specific conditions. The Department for Transport ruled that they should be "shovel ready" and at a well developed stage, with all plans needing the support of Network Rail and line operators.

"It is only now that some stations that were closed as part of the Beeching Axe are being afforded the chance to re-open."

Transport secretary Patrick McLoughlin backed the plans, stating the government was determined to boost the rail infrastructure, with new stations earmarked to provide that boost. Bids were accepted in February and, following a revision period, fourteen applicants were whittled down to five that would receive funding.

Kenilworth station in Warwickshire will receive £5m, Newcourt in Devon £750,000, Ilkeston in Derbyshire £4.5m, Lea Bridge in Waltham Forest £1m and Pye Corner in Newport more than £2.15m, with the overall aim of getting the stations back into regular use for the benefit of local residents.

While the UK Government’s efforts to provide funding for such renovation are commendable, the fact remains that some stations in the UK, either through poor original siting or a dramatic change in employment or residential status over the years, are unreasonably underused.

If demand and revenue forecasts conducted by independent bodies are able to identify business cases for such stations to close and save the likes of Network Rail money, then it may be time for the government to welcome in a new, more restrained Beeching Axe.

Level-crossing safety remains at the top of the global rail industry agenda as a raft of new technologies threaten to make traditional techniques obsolete.