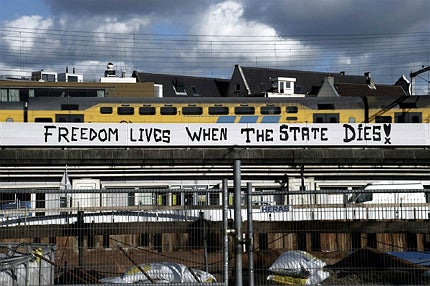 To most, a country’s railway infrastructure is simply the foundation on which millions of people make their daily journeys from A to B. To a few, the long stretches of comparatively unmonitored depots, walls, rolling stock, bridges and tunnels represent something entirely different – a blank canvas.

Graffiti artists have long pursued their passion on the property of railway companies and train operators, whether it’s the quick scrawl of a ‘tag’ or the colourful, bubble-lettered dioramas seen in elaborate ‘pieces’. Personal opinions on graffiti and its cultural place might vary, but the stance of the property owners that have to foot the clean-up bill is resolutely united – it’s an unsightly blight on rail systems, dangerous for its practitioners to put up and unforgivably costly for authorities to pull down.

In the UK, infrastructure manager Network Rail spends more than £3.5m a year removing graffiti on its railways. In New South Wales, tens of millions of taxpayer dollars are poured into graffiti clean-up, with railway graffiti accounting for about six percent of the total graffiti incidents in 2010.

The German capital of Berlin, meanwhile, is renowned as a world hotspot for graffiti, and the country’s national railway Deutsche Bahn (DB) has been paying the price. In 2012 alone, the company reported more than 14,000 graffiti cases across Germany, which cost more than €7m to remove. As a result, the frustrated railway is testing a new method of combating graffiti – one with a distinctly high-tech slant.

Unmanned aerial vehicles (UAVs) are mostly commonly known for their sometimes controversial role in modern military operations, as well as a growing list of civil surveillance and industrial applications. As sophisticated and costly pieces of equipment, the use of these drones is generally confined to crucial security and research operations. But now DB has taken the unprecedented step of testing a new mini-drone tasked with the observation and deterrence of spray-painters on its property.

"The mini-drone will be able to hover 150 metres above DB’s train depots."

According to reports in the German media, DB is testing a €60,000 four-propeller UAV in the summer. The md4-1000 mini-drone, manufactured by German company Microdrones, will be able to hover 150 metres above DB’s train depots and maintenance facilities, equipped with a high-resolution infrared camera to gather evidence on trespassing taggers.

The drone is capable of flying at speeds of up to 54 kilometres an hour, with enough power to patrol for 80 minutes at a time and an autopilot function that will allow it to operate independently for up to 40 kilometres.

On the surface, DB’s €60,000 investment seems like a wise one, given that the drone, which could be joined by more units if the test is deemed successful, might help solve a problem that costs the company millions every year. An unnamed DB spokesperson told AFP that the drone would be operated "in problem areas, where taggers are most active", increasing the chance that it will make an immediate impact.

However, DB’s plan has received a mixed reception in Germany, a country with unusually strict privacy and surveillance laws – to comply with them, internet giant Google was recently forced to give residents an opt-out option when carrying out its ‘Street View’ image captures of German neighbourhoods.

"The very prospect of using drones to spy on citizens in German cities is too much for some."

The seriousness with which Germany takes its citizens’ privacy rights is the reason that DB has strongly emphasised that it would only use drones to monitor its own property, leading to criticism that the company might just end up pushing graffiti into other, possibly more populated, areas. In any case, the very prospect of using drones to spy on citizens in German cities is too much for some. "In ten years, we’re going to have a sky full of drones," said German Green Party politician Wolfgang Wieland.

Beyond privacy concerns, some experts have called into question the idea of drones as a proportionate and effective method of reducing graffiti. Air and traffic law specialist Elmar Giemulla told Deutsche Welle (DW) that as the drones’ pilots would be unlicensed, German law would restrict them to flying within the operator’s own line of sight. "If I can see the flight device as the person steering it, then other people can see it as well," Giemulla said. Although the drone is reportedly very quiet, it would need to be lit up at night, further compromising its stealth credentials.

Other critics of the scheme claim that drones would likely only add some spice to taggers’ nightly antics. DW quoted lawyer and graffiti expert Patrick Gau: "It will probably lead to cases where you’ll see a YouTube video in which such drones are filmed, followed by two people who spray a quick image just to show: we can outsmart the Deutsche Bahn."

Low-tech solutions for a low-tech problem

Instead of deploying drones to tackle graffiti, which Gau described as "using a sledgehammer to crack a nut", observers have called on DB to make better use of existing methods of preventing graffiti.

Anti-graffiti surface films can be applied to key locations like rolling stock and ticket machines to make spray-paint and markers easier to remove, either through wiping or peeling the film away.

In terms of deterrence, educational programmes such as the graffiti lesson plans made available to schools by rail organisations like Queensland Rail in Australia and the UK’s Rail Safety and Standards Board stress the dangers of spraying near electrified tracks, helping to demystify graffiti for younger children. Community measures like legal walls also help drive casual taggers towards risk-free street art, leaving only the hardcore to roam the streets in search of thrills.

With Germany’s highly sensitive attitude to personal privacy and curbing the growth of unwarranted surveillance, it seems an unlikely starting point for the use of drones to reduce railway graffiti.

DB will have to work hard to convince the German public that the community benefits of UAV-driven anti-graffiti measures will outweigh the privacy concerns, and the country’s regulations look set to limit the programme’s potential effectiveness in any case. Nevertheless, rail companies around the world, especially in countries with more lax privacy laws, will likely be keeping an interested eye on DB’s anti-graffiti drone experiment.