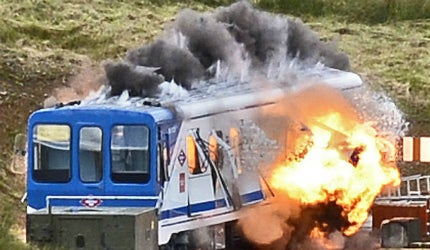 For those intent on bringing chaos and terror to densely populated urban areas, subterranean rail systems remain a salient target.

Easily entered and exited on foot, punctuated by scheduled stops along fixed routes and free from aviation-style searches and identity verification, the labyrinthine networks of tunnels and platforms are notoriously difficult to police, making them especially vulnerable to coordinated terrorist attacks, such as those carried out in Madrid’s Cercanías commuter train system in 2004 and on the London Underground the following year.

These atrocities and others like them provided the impetus for the SECUREMETRO project. Funded by the European Commission under the auspices of its €8bn Seventh Framework Programme, it united a consortium of 11 stakeholders from France, Italy, Spain and the UK in a common cause: to design inherently secure, blast-resistant and fire-safe metro vehicles.

"SECUREMETRO is one of the first pan-European projects to carry out full-scale explosive testing on a blast-resilient prototype vehicle," states project coordinator Conor O’Neill of NewRail, a research centre serving the UK rail industry.

"The primary objective is to improve metro vehicle resilience to bomb blasts and firebomb attacks through intelligent structural design and return the network to normal operation as quickly as possible. By doing this, we hope to reduce the attractiveness of metro systems so that they become less favoured as a terrorist target – and ultimately minimise death and injury as a result of attacks."

"SECUREMETRO is one of the first pan-European projects to carry out full-scale explosive testing on a blast-resilient prototype vehicle."

Anti-terrorist initiatives undertaken in the wake of the Madrid and London bombings have primarily focused on preventative or ‘soft’ strategies, including risk management, surveillance using intelligent video analysis (IVA) and consequence mitigation and deterrence. SECUREMETRO, however, takes a different approach, as O’Neill explains.

"We were one of the first projects to conduct in-depth research into metro carriage security from a blast perspective," he tells me from NewRail’s headquarters at Newcastle University. "How does the blast wave penetrate down through the vehicle? How will all the different interior elements of the carriage react should a terrorist attack occur?

"We analysed everything – window glazing, seat fittings and materials, lighting systems, communication lines, even the materials used in LCD screens. We are in the process of analysing the multitude of data from our blast testing programme and, by the middle of 2013, should be able to confirm which technologies are best suited for implementation in metro vehicle design throughout Europe and worldwide."

A history of violence: scenario definition and blast testing

Work on SECUREMETRO began in January 2010. Two months later, rush-hour attacks on Moscow’s Metro system by two female Chechen suicide bombers left 40 people dead and a further 102 injured. The attack was a stark reminder of the need for research into the specific tactics employed by terrorists.

"We analysed terrorist attacks going back 50 years or more to see if we could identify typical trends and methodologies that were used on the rail system," O’Neill explains. "This enabled us to identify the typical size of the device and where on the vehicle it might be placed, whether it might be deployed during rush hour or off-peak hours, and whether it was placed in a tunnel while the train was moving or in a station.

"Once these potential scenarios were defined, that gave us the criteria we needed to undertake blast testing."

This testing was conducted on a decommissioned Series 5000 metro train supplied by another of the project partners, Metro de Madrid.

"We looked at the propagation of the blast wave through the length of the coach and the subsequent damage to the floor, walls and ceiling, paying particular attention to the doors, which are the main source of egress," says O’Neill.

"We also studied the types of projectiles that were produced and distances they travelled away from the vehicle after the blast.

"As a result, we decided to try tethering the ceiling panels to the main structure using metal wire. Not only did this hold the equipment in place, it also meant there was less detritus in the gangway."

Another priority was protecting the driver by installing energy-absorbent materials in the bulkhead.

"The driver acts as the central point of contact and protecting the bulkhead from penetration by shrapnel is crucial," says O’Neill. "The driver not only knows the vehicle and the infrastructure, he also knows the transport system and the lines of communication, so protecting him helps to save lives."

The next step was to assess the energy-absorbing materials used in current state-of-the-art metro vehicles – everything from basic flat panels and gangway blast screens through to large shaped components – in order to assess their behaviour in terms of fragmentation and penetration, and how they affected the propagation of the blast wave following detonation.

"We analysed everything from the carriage window glazing and seating to the materials used in the screens in LCDs."

"We undertook a huge suite of testing where we assessed [more than] 64 types of materials to understand their reaction to blast loadings," says O’Neil. "Once we had the baseline, we pumped everything back into our simulations and came up with a design that we felt would have a good response to a bomb blast."

The final stage of the research involved manufacturing a full-scale prototype metro carriage, a joint venture involving three SECUREMETRO project partners, Tecnalia, Sunsundegei and Expal. The prototype vehicle then underwent another blast test to evaluate the performance of the new designs and materials.

"We looked again at the energy-absorbent materials as well as the effect of seat orientation, both longitudinal and transverse," says O’Neill. "We also changed the glazing mounting; on some metro systems the glazing is held in by joints, while we experimented with bonding it on. Overall, the blast testing, which concluded in October, was a complete success."

On the right track? Looking to 2013 and beyond

The 9/11 Commission Report, released in the wake of the terrorist attacks in New York and Washington on 11 September 2001, concluded that "opportunities to do harm are as great, or greater, in maritime or surface transportation" as they are in aviation.

With this sobering assessment in mind, I conclude by asking O’Neill what SECUREMETRO hopes to achieve by its 2013 deadline and whether its recommendations can realistically be taken out of the laboratory and into the marketplace in the form of commercially viable designs.

"We hope to reduce the attractiveness of metro systems so that they become less favoured as a terrorist target."

"Midway through 2013 we will produce a set of guidelines that can be used by rail manufacturers to ensure that manufacturers take blast resistance into account when they design their vehicles," he says.

"There is good scope for applying the technologies fairly rapidly. A lot of the design changes such as the tethering system and the improvements to the driver baulkhead are not game-changers, so incorporating them is a fairly easy matter. Having the operators and manufacturers on board meant that the project only developed solutions that could be implemented both in future vehicles and as a retrofit."

What is clear is that these improvements in metro carriage design, used in conjunction with improved surveillance and emergency response techniques, have the potential to enhance passenger security on underground rail systems.

"Ultimately, there are a whole suite of systems that are either in place or that kick in once a threat is felt," says O’Neill.

"What we are doing is ensuring that, if all these systems are bypassed by a terrorist, then the inherent design of the vehicle itself offers a level of protection. It’s the last line of defence."

Train stations around the world are approaching full capacity, as passenger numbers grow and cities are linked with new rail lines.