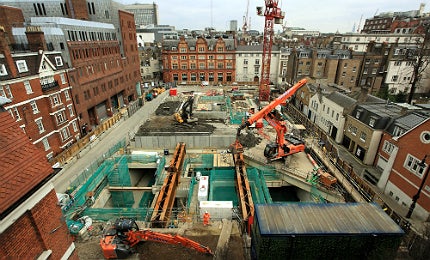 Crossrail is a capacity enhancement rail project centred on London.

Europe’s largest construction project will boost the city’s rail capacity by ten percent when it opens fully in 2018, cutting journey times across London and, it is hoped, fuelling the regeneration of previously neglected areas through improved accessibility.

More than 7,000 people are currently working at 40 Crossrail work sites across the capital, including nine new or completely overhauled stations.

But perhaps the project’s biggest task is the construction of 26 miles of tunnels beneath the city streets, a marathon undertaking in the most literal sense.

Crossrail reached its most recent tunnelling milestone at the end of March with the arrival of Phyllis, one of the eight tunnel boring machines (TBMs) set to work on the project, at the new Bond Street station on Davies Street. The arrival marked Phyllis’s 2000th tunnel ring, and the halfway mark on the machine’s 4.3-mile tunnelling route to Farringdon, where another massive Crossrail hub station is being built.

These images, released by Crossrail, mark the project’s latest engineering achievement and give some insight into the construction of the new Bond Street station. 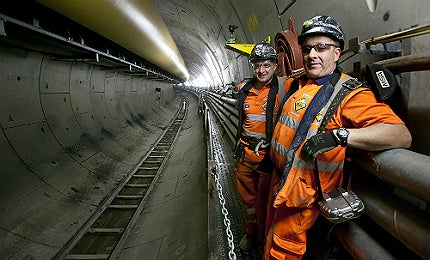 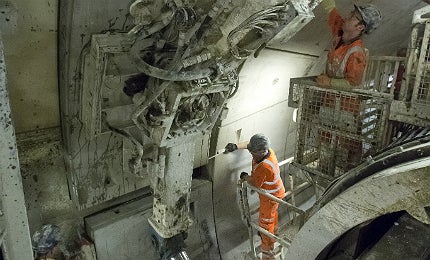 Crossrail’s TBMs are designed to be operated by a ‘tunnel gang’ of around 20 people, including 12 people on the TBM unit and eight people working from the rear of the machine to above ground. Crossrail ran a public vote to name each of the machines – Phyllis was named after Phyllis Pearsall, a London portrait artist who created the London A-Z street map in the 1930s, traversing 23,000 streets in the process. 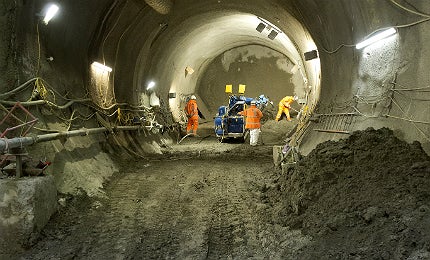 Tunnelling works at the Hanover Square site of the new Bond Street station. When complete, the new Bond Street will be designed to handle anticipated passenger traffic growth from the current 155,000 passengers to 220,000 passengers a day. Hanover Square is the site of one of the station’s two new ticket halls, with the other located on Davies Street. The final station will feature step-free access to its 260m platforms, which will sit 26m beneath the south side of Oxford Street, one of London’s prime shopping locations. 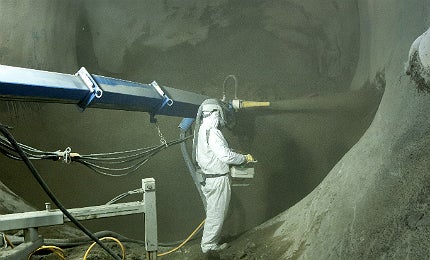 A worker sprays concrete lining around a tunnel leading into Bond Street’s Hanover Square site. While the TBMs are responsible for Crossrail’s main tunnels, the sprayed concrete lining (SCL) technique is being used to build 12km of station platform tunnels, passages, access and grout tunnels along the route, where shorter tunnels of variable diameter are required. The SCL technique involves spraying the excavated ground with concrete to stabilise a tunnel and form its permanent lining. 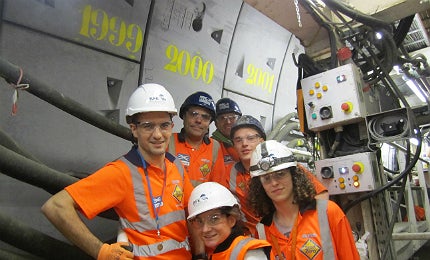 A Crossrail team celebrates TBM Phyllis’s 2000th tunnel ring in the approach to Bond Street station. Crossrail programme director Andy Mitchell said: "Phyllis’s arrival at Bond Street is a significant milestone for Crossrail and within the next few weeks she will mark the half way point in her tunnel journey. When completed Crossrail will provide essential new links and additional transport capacity with an extra 1.5 million people able to reach Oxford Street within 45 minutes." 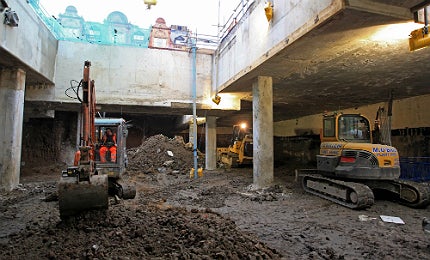 Excavation works are ongoing at Bond Street’s Davies Street ticket hall. Around 4.5 million tonnes of excavated material from the Crossrail project will be used to create the 1,500-acre Wallasea Island nature reserve on the Essex coast, which is expected to host tens of thousands of migratory birds, as well as helping protect against climate change and coastal flooding. Crossrail is hoping to reuse almost all of its excavated material, which will either be transported via its Northfleet site to Wallasea Island or other regeneration areas.

Crammed carriages are a common sight on metro systems during peak hours, and tackling overcrowding is a priority for most networks.