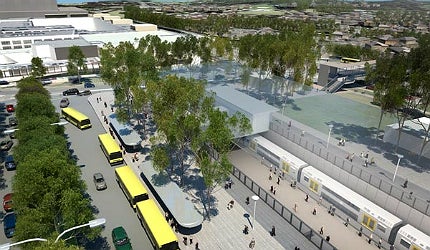 The project’s first Environmental Impact Statement (EIS) was approved in September, allowing work to begin on the line’s 15km of tunnels, station excavations and the project’s four kilometre-long section of elevated track.

The project’s second EIS, released to the public in early November, provided more details about the design and working details of NWRL’s eight stations.

Sydney commuters were given until 3 December 2012 to comment on the design of the stations and the general operation of the line, including commuter parking and effects on the areas surrounding the stations.

Elsewhere in Australia, an ongoing debate regarding the safety of rail crossings across the country intensified after a fatal incident in Melbourne.

A truck driver crashed through a local level crossing, colliding with a moving Metro train, killing one passenger and injuring 13 others.

Australian rail safety group trackSAFE is calling for penalties for drivers violating level crossing laws in the state of Victoria to be increased from the current A$704 fine, to deter drivers from reckless behaviour around level crossings in the future.

Meanwhile, the government is planning to remove 177 suburban level crossings from Melbourne’s rail infrastructure. trackSAFE said level crossing collisions between trucks and trains are the most costly type of incident for Australia’s rail industry, both in terms of lives lost and economic and social impact.

Iran Railways reportedly has the capacity to complete 350km of rail lines each year, with the country’s new Alborz locomotive production plant adding new locomotives at a rate of approximately 120 a year.

Iran is also in the early stages of a project to build a 400km rail line linking the country to Tajikistan, Afghanistan, Kyrgyzstan and China.

"The government is hoping to speed up the bidding process by starting with the contract to build the trains."

The clock is ticking for companies to submit bids to build trains for and operate Brazil’s proposed $16.5bn high-speed rail link between Rio de Janeiro, Sao Paulo and Campinas before the deadline of 30 April 2013.

Luckily for Hyundai, the Brazilian Government has relaxed its previous requirement that all bidders should have ten years’ experience of operating high-speed rail lines down to five years with no incidents.

The shift in requirements allows Hyundai, which has nearly nine years of high-speed experience, to join other prospective bidders such as GEC Alsthom, Siemens, Mitsui, CAF and Talgo, which have all expressed an interest in operating the proposed high-speed line.

Russia’s ageing locomotive fleet received a welcome financial boost in November, with Russian Railways’ announcement of its plans to invest $2.68bn in 2013 to order 770 long and short-haul locomotives, the equivalent of the country’s entire annual production capacity.

"Alstom and Siemens are set to benefit greatly from Russia’s locomotive order."

The order is part of Russian Railways’ $12.9bn total investment for 2013 will reportedly fund the purchase with federal subsidies and $5.5bn in loans.

Alstom and Siemens are set to benefit greatly from Russia’s locomotive order because of their part-ownership of Russian locomotive suppliers.

Alstom owns a stake in Transmashholding, which will supply the majority of the locomotives ordered by Russian Railways. The order comes not a moment too soon for Russia’s rail fleet – 70% of the country’s electric locomotives and 80% of its diesel trains are considered to be life-expired.

Scotland’s two principal cities are set to become linked by high-speed rail, if a new plan announced by the Scottish Government in November gets the green light. The proposed 140mph Glasgow – Edinburgh high-speed line would reduce journey times between the cities to less than half an hour.

The UK Government’s £33bn HS2 high-speed rail line is eventually scheduled to reach Scotland, but this is still a dim and distant goal.

The Scottish Government believes it can complete the Glasgow – Edinburgh high-speed line by 2024, before the completion of HS2’s first stage between London and Birmingham.

"We will not wait for Westminster to bring high-speed rail to us," said Scotland’s deputy first minister Nicola Sturgeon.

"We have already made moves towards seeing a high-speed line in Scotland and the evidence is now in place that this is feasible long before the HS2 proposals."

The Honolulu Authority for Rapid Transit (HART) signed a full funding grant agreement with the US Federal Transit Administration (FTA) in November, securing a $1.55bn grant from the administration to help carry out a $5.2bn elevated rail project currently under construction in Honolulu on the Hawaiian island of Oahu. HART will initially receive $200m in New Starts funding for fiscal year 2012.

The project, to be carried out in four design and construction phases, involves the construction of a 20-mile elevated rail line with 21 stations, running from East Kapolei to the Ala Moana Center, through the centre of Honolulu and serving communities including Waipahu, Pearl City, Aiea, Kalihi, Chinatown, Downtown Honolulu and Kakaako.

The line is set to open in 2019, and will be the first rail transit system in the city.

The tail end of November brought with it a major acquisition in the form of Siemens’ £1.7bn purchase of Invensys Rail, the rail automation division of UK company Invensys.

The deal is part of Siemens’ plan to increase its presence in the global rail automation market. Invensys Rail, which generated revenues of around £800m in the financial year ending March 2012, has carried out rail control and signalling contracts in the United Kingdom, Spain, the US and Australia and has started to expand into emerging markets.

If the deal, which is still subject to regulatory and shareholder approval, goes ahead, Invensys Rail will be folded into Siemens’ rail automation business.

Last month marked the end of the line for Sydney’s monorail, with closure set for summer 2013, while Dijon opened its first tram line and Amtrak started testing for 160mph Acela services on the Northeast Corridor.