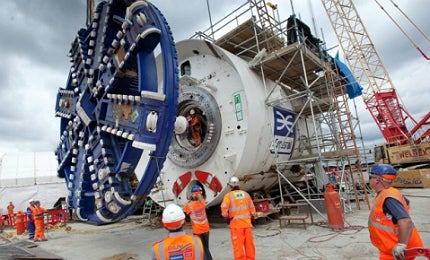 Mike Hewitson is head of passenger issues at Passenger Focus, a statutory body funded by the UK Department for Transport (DFT) that represents the interests of rail, bus, coach and tram passengers. He joined Passenger Focus in 1995, as part of the then regional network of passenger committees, before moving on to national policy issues.

Julian Turner: Network Rail has announced that it will spend £37.5bn developing UK rail infrastructure over five years. How did it arrive at this figure?

"In terms of the frequency of trains and the sheer volume of passengers, no other European capital gets close to London."

Mike Hewitson: The government produces two documents – the statement of funds available (SOFA) and the high-level output statement (HLOS) – which outline how many millions it has to spend on rail in a five-year ‘control’ period and what it wants in return in terms of capacity, punctuality and safety.

Network Rail then goes away to work on plans detailing how to achieve these government output targets and presents the Office of Rail Regulation (ORR) with the bill.

The ORR then factors in efficiency savings before coming up with the final cost of operating, maintaining and renewing the rail network in the five-year period, based on what the government wants.

Finally, it works out how much the train companies have to pay Network Rail to operate on its track and stop at its stations.

JT: What percentage of that £37.5bn investment will come from government tax subsidies, how much from ‘efficiency savings’, and how much will be paid for by passengers in the shape of fare increases?

MH: The fares policy is set by the government; Network Rail has no say in how fares are decided. The current government has aspirations to increase the passenger share and decrease the burden on the taxpayer. This gets factored into the SOFA; a lower government subsidy through SOFA means, potentially, a higher expectation on fares.

"When inflation is high, that can push some people into double-digit fare rises, which has got to stop."

Inflation plus one percent is currently the norm, with the option to go up by another five percent on an individual fare, as long as the overall basket of fares stays at the basic level, so passengers will still be paying above inflation.

However, you won’t necessarily see that in Network Rail’s numbers; it’s in there, but it’s just not that obvious.

The government says it’s committed to ending inflation-busting fares, then adds a huge ‘but’, which is: when costs are under control. A better question is ‘how realistic is it that the industry will ever get its costs under control and become more efficient?’. The government is edging in the right direction, but we would like to see a timeframe attached to that.

It should also be noted that Network Rail has a government indemnity of something like £20bn, allowing it to borrow from the market against its asset base at relatively cheap rates. It gets an awful lot through that type of borrowing and because it’s a private company, that stays off the government books. There’s a huge amount of debt funding a lot of the enhancements and at some point that’s got to be paid for.

JT: Rail companies are allowed to put up fares by as much as the Retail Prices Index (RPI) plus five percent. Why was this ‘flex’ option introduced and what are the repercussions for passengers?

MH: From a passenger perspective, the ‘flex’ creates all sorts of complexity. You have these big announcements every August stating that fares will go up by, for example, 4.2%, and then come January many passengers are asking ‘why has mine gone up by five percent?’

There’s a complete disconnection between what you get and what you pay for, and passengers can’t understand that.

The fares aren’t necessarily linked to the service provision. The franchise agreement that each train company has specifies a minimum service that they have to provide and as long as they meet that, they can do what they will.

JT: Does the ‘flex’ option mean that certain passengers on certain lines end up paying higher fares, in order to subsidise other services?

MH: What you tend to hear is ‘why am I paying more on the main line when on the branch lines their fares aren’t going up as much?’, or vice versa, which just feeds the confusion and unfairness. 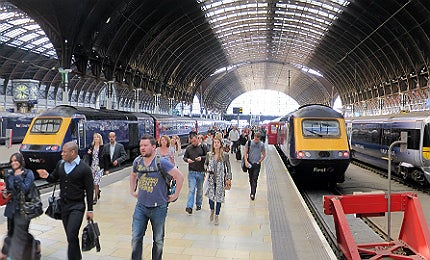 London Paddington is one of the capital’s busiest stations and key part of the Crossrail scheme. Image courtesy of Victor-ny

The industry argues that it needs the extra money to be responsive to changes in the market. If it wants to promote a branch line, for example, it can drop its prices somewhere else. If it needs to compete with an airline, then it has got some room to be competitive.

I can sort of see that, but I’m not sure it needs a five percent flex. When inflation is high, that can push some people into double-digit fare rises, which has got to stop. Passenger Focus would like to see a move towards a flat rate increase.

JT: Is Network Rail on course to hit the government target of £3.5bn of savings by 2019, as specified in the 2012 review by Sir Roy McNulty?

MH: The big grey area for us is that the McNulty Review saw frontline staff as one of the areas for savings. We are concerned that staff are just seen as a cost, rather than factoring in the value they bring in terms of less tangible things, such as personal safety, providing information when things go wrong and navigating passengers through what can be a tortuous complexity of ticketing.

From a train company’s perspective, it doesn’t own the trains or the stations, it leases them.

Its main cost and variable overhead is staff, so if you want operators to reduce costs, that’s about the only thing they can pick at. But that doesn’t mean it should be done. Simply seeing staff as an overhead rather than ambassadors for the railway is short-sighted.

JT: Dave Higgins, chief executive of Network Rail, said recently: ”We haven’t invested to meet demand [in the last 50 years] and playing catch up is always more expensive”. Why has the government and Network Rail waited until now to announcement the £37.5bn investment?

MH: The shortage of investment was always at the back end of British Rail. The first ten or so years of privatisation were largely about a catch-up investment. There’s still a bit of that to be done, but the debate at the moment is more about improvements and enhancements – electrification programmes and more efficient signalling systems – and projects such as Crossrail and Thameslink that add capacity.

JT: How does the UK railway network compare to those in Europe in terms of efficiency, reliability and value for money?

"There’s a complete disconnection between what you get and what you pay for, and passengers can’t understand that."

MH: Passenger Focus did some research on this two or three years back and certainly then the UK had the most expensive commuter fares in Europe. But we also had a more frequent service because of it and in terms of the frequency of trains and the sheer volume of passengers, no other European capital gets close to London.

Interestingly, on longer-distance journeys, we have some of the cheapest fares in Europe, but also some of the most expensive – sometimes on the same train.

If you book ahead on one of these advance fare deals, you could travel much cheaper than you could, say, on the TGV in France. But if you rolled up on day of travel, then you pay much more. So, the cost of flexibility in the UK is higher.

Clearly, the TGV-type trains are wider, smoother, faster, but where the UK excels is in the regional railway sphere. We have a far more frequent and reliable service than in some parts of France, for example, so it’s a bit too simplistic to say that the UK rail network is the poor cousin of Europe – in many areas we are well ahead.