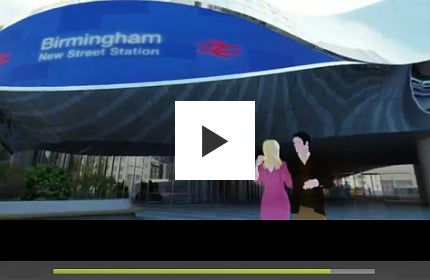 Birmingham New Street station, which receives around 80% of incoming train services to the city of Birmingham in the UK’s West Midlands, is the anchor of the British railway system. As well as playing a vital role in many of the West Midlands’ local and suburban rail services, the station is a major destination on the West Coast Main Line and serves as the central hub for the long-distance CrossCountry network.

"Passengers have long complained about the station’s dark, unwelcoming interior and frequent overcrowding."

For many years, however, New Street’s station building and public face hasn’t been an adequate reflection of its status as the busiest station outside London and the busiest interchange station in the UK.

Passengers have long complained about the station’s dark, unwelcoming interior and frequent overcrowding – indeed, the 140,000 passengers who now pass through New Street every day represent more than double the traffic that the station was initially designed to handle when it was redeveloped in the 1960s.

As complaints about the station’s inefficiency and unappealing 60s-era architecture intensified over the years – it was voted the UK’s second biggest eyesore by readers of Country Life magazine in 2003 and a passenger poll in 2007 named it the joint worst station in the UK – pressure built to completely overhaul New Street. This pressure lead to an ambitious plan by Network Rail and its partners, launched in 2006, to transform the station into a truly 21st century transport hub.

Construction work on the £600m Birmingham New Street Gateway project, as it came to be known, started in April 2010 and is expected to be fully completed in 2015. Although the project will not actually increase the station’s train capacity – something for which it has been criticised – the changes are specifically designed to ease passenger overcrowding and replace an eyesore with a memorable focal point for transport and inner city retail.

"The station’s flashy new façade will tie into an upgraded retail and leisure district."

The full scope of the phased work programme, which is intended to integrate the new station with the wider regeneration of Birmingham’s city centre, involves the creation of a new light-filled concourse that will be more than three times larger than the old station.

Other upgrades to the station include the redevelopment of the Pallasades shopping centre that sits atop New Street, including a brand new John Lewis department store, which is scheduled to reopen as Grand Central Birmingham in autumn 2014. The project is also creating a new atrium, opening a new entrance on Moor Street and refurbishing platforms.

Most visible to the people of Birmingham, however, will be the revamped main entrance to the station – a modern, shimmering façade that reflects a concerted effort by Network Rail and its delivery partner Mace to create a public face worthy of "Birmingham’s growing reputation for good design".

The project is now nearing what Network Rail calls the "halftime switchover" – the completion of the first phase in the station’s redevelopment. On 28 April 2013, passengers will be able to access the first half of the new concourse, allowing travellers to physically see the improvements for the first time. This first half of the concourse will be one and a half times the size of the old concourse on its own, reducing overcrowding and improving accessibility for passengers with a number of new links and entrances on Stephenson Street and Hill Street.

"On 28 April 2013, passengers will be able to access the first half of the new concourse."

And, importantly for a project that has emphasised its ability to undertake major upgrades without disrupting passenger services, the opening of the new concourse’s first half allows the old station to shutdown entirely so the project can move on to revamping the existing building and completing the new, improved Pallasades shopping centre.

"Keeping New Street open to people living, working and visiting the city whilst such a major redevelopment has been taking place over the last two years has been a tremendous technical achievement," said Birmingham City Council leader Sir Albert Bore. "The fact that the 140,000 passengers using the station every day have the confidence that they can go about their business without disruption and the city has kept moving is to be commended."

Network Rail’s New Street project director Chris Montgomery added: "The half time switchover on 28 April will be the first time passengers see real changes in how they use, and access New Street station. By switching off the old station and opening the first half of the new concourse next door, we can keep passengers moving through New Street while we continue rebuilding the existing half of the station and shopping centre above."

When the whole project is finally complete in 2015, the transformed New Street station will offer the full concourse, along with 30 new escalators and 15 elevators to improve passenger flow between the concourse and the platforms below. The station’s flashy new façade will tie into an upgraded retail and leisure district in the heart of Birmingham, and new pedestrian links surrounding the station are intended to help open up the city centre, anchoring plans to regenerate not only Birmingham’s main station, but Birmingham itself.