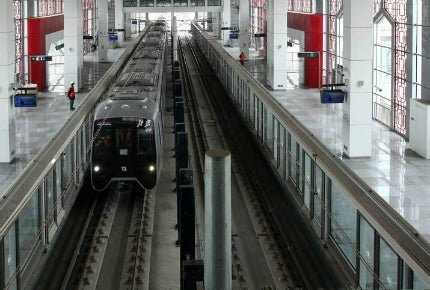 Birmingham New Street station is one of the UK’s most important rail hubs, but until recently its design and facilities didn’t match up to its central position in the country’s railway network. An ongoing £600m redevelopment project being carried out by Network Rail aims to change that, and in May the project opened the first half of the station’s new concourse.

The new concourse is one and a half times bigger than its predecessor and has a new ticket office, 30 new escalators and 15 lifts for better access to platforms.

Other works carried out under the project include the closure of the current vehicle and pedestrian entrance outside the front of the station on Smallbrook Queensway, with vehicle access moving across to a new drop-off area and short-stay car park located off Hill Street. Network Rail and its delivery partner Mace are delivering the entire redevelopment project, which is expected to be finished in 2015.

Work is ongoing for dozens of new metro projects in cities across China, and the latest to open to the public is the first phase of Beijing Metro‘s Line 14.

The line is operated by Beijing MTR, a joint venture between Hong Kong’s MTR and Beijing Capital Group, which also operates Beijing Metro Line 4 and the Daxing Line extension.

The first phase of the 47.3km Line 14 serves seven stations from Zhangguozhuang Station to Xiju Station in the south-western part of the city.

The Australian Government has set aside nearly $24bn for investment into the country’s road and rail transport systems as part of its 2013-14 budget.

For Australia’s rail network, this cash injection is intended to fund the construction and upgrade of more than 4,000km of rail lines, particularly on the Interstate Rail Freight Network, which is now carrying more freight, at higher speeds, than ever before.

While the UK Government continues to tinker with the plans for phase two of its £32bn High Speed 2 (HS2) project, the high-speed line’s first phase between London and Birmingham has now moved into its consultation stage.

The UK public will be able to make their views known on HS2’s phase one draft environmental statement and proposed design refinements until 11 July 2013.

The project’s draft environmental statement is intended to help HS2 Ltd integrate its planning into the landscape through new design and construction methods, both during building and operation.

As for design changes, the major proposed refinement for phase one involves the construction of a tunnel under Ealing and Northolt in north west London, and at Bromford in the West Midlands.

As the UK’s discredited rail franchising system is gradually overhauled and relaunched, a number of interim contract extensions have been announced to provide some stability for rail services in the meantime.

The Essex Thameside franchise, covering east London and south Essex, is the latest line to have its operator’s contact lengthened, with National Express subsidiary c2c Rail signing an extension agreement to run the service for another 16 months until September 2014.

"[The extension] gives the industry time to develop their long term plans for the future franchise and confidence to passengers that services will continue for the next 16 months," said UK Transport Secretary Patrick McLoughlin. The 25-station Essex Thameside network carries around 36.4 million passengers annually, and the franchise covers the operation of around 6.5 million train-km per year.

The Chicago Transit Authority has started work on a major reconstruction of the Red Line South, the busiest line on Chicago’s ‘L’ elevated rapid transit system. The project involves the replacement of old tracks and the renovation of other systems to speed up travel times.

For the five-month reconstruction of the 40-year-old rail line, CTA has closed the tracks from Chinatown’s Cermak stop to 95th street.

The scope of work for the project involves replacing all railroad ties, rails, third rail, drainage and communications systems, as well as ballast and the stone material that holds the ties in place. CTA will also renovate eight of nine rail stations along the Red Line South branch.

The rail industry is constantly on the lookout for new ways to make ticketing and fare systems more convenient for passengers and more efficient for operators, from smart tickets to transport apps.

Last month Cubic Transportation Systems showed off its own contribution to the process with its potentially game-changing NextAgent transport ticketing concept.

NextAgent works as a combination of ticket office, call centre and vending machine. Under the system, passengers interact with ticket agents at a centralised ticketing hub through a high-definition screen.

According to Cubic, the centralised hub concept will save operators money by reducing the need for local ticket offices, as well as bringing the benefits of pooled expertise to better serve customers.