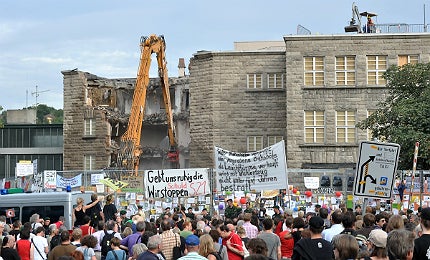 German rail operator Deutsche Bahn has decided to proceed with the Stuttgart 21 station project, despite its cost rising from €2.6bn in 1995 to €6.5bn today.

The project, which will replace Stuttgart’s main terminus station with an underground through-station that will be integrated into the European Paris-Vienna main trunk route, is scheduled to be completed in 2022, three years later than originally planned.

Deutsche Bahn chairman Rüdiger Grube said that dropping out of the controversial plan, which has sparked protests over its soaring cost, will cost the company more than building it.

BNSF to test LNG as fuel in freight locomotives

Alternative fuels for rail vehicles have been picking up momentum in the last few years, with US rail operator BNSF recently announcing its plan to test liquefied natural gas (LNG) as a new fuel for its freight locomotives later in 2013.

The operator has been working with locomotive manufacturers GE Transportation and EMD to develop the LNG engine technology that will be used in the pilot project.

BNSF chairman and CEO Matthew Rose said: "While there are daunting technical and regulatory challenges still to be faced, this pilot project is an important first step that will allow BNSF to evaluate the technical and economic viability of the use of liquefied natural gas in through-freight service, potentially reducing fuel costs and greenhouse gas emissions, thereby providing environmental and energy security benefits to our nation."

The first phase of London’s Crossrail project is due to open in May 2015 between Liverpool Street and Shenfield, and Transport for London (TfL) has now invited bids to operate the line.

The first Crossrail operations, scheduled to start in May 2015, will take over the Greater Anglia stopping services between Liverpool Street and Shenfield, using existing lines. Services to Shenfield will initially be run with existing rolling stock, with older trains gradually replaced by the new Crossrail electric multiple-units from May 2017.

The first phase of the UK’s High Speed 2 (HS2) project has come against stiff opposition from local authorities and campaign groups, which have claimed that the project’s consultation and environmental assessment has been inadequate.

HS2 received a boost in March, however, when the High Court rejected nine out of ten legal challenges brought against the project’s route from London to Birmingham.

The court dismissed challenges to the fairness and lawfulness of the 2011 consultation on the phase one route, as well as claims that the project failed to comply with the Strategic Environmental Assessment (SEA) directive.

First half of Birmingham New Street station to open in April

Birmingham New Street station is currently undergoing a major overhaul to transform it from an ugly, unwelcoming 1960s-era structure into a truly 21st century rail hub. The first phase of the redevelopment is now approaching completion, with Network Rail announcing that the first half of the station’s new concourse is opening to the public on 28 April 2013.

The redevelopment of the station started in 2010 and marks the first major change carried out at New Street in more than 40 years. Following the opening of the new concourse and new entrances, the old station and all of its current entrances will be closed for rebuilding works to continue.

Illinois selected to lead multistate high-speed rail procurement in US

The US Federal Railroad Administration (FRA) has selected the Illinois Department of Transportation (IDOT) to lead the procurement of high-speed rail locomotives on behalf of the US states Illinois, California, Michigan, Missouri and Washington.

As part of the plan, 35 locomotives will be purchased, some of which will help Illinois run a 110mph service on at least 75% of the Chicago – St. Louis corridor by the end of 2015. As lead agency, IDOT will be responsible for the procurement, involving other states in the planning and procurement process, developing a project plan and managing a review of the procurement among the other states and the FRA.

Australian state public transport agency Public Transport Victoria (PTV) has announced that it will invest A$30bn ($31.4bn) to develop the suburban rail network in Melbourne up to 2031.

The existing network will be expanded to transport an additional 50,000 people during peak times within ten years and an extra 130,000 people within 20 years.