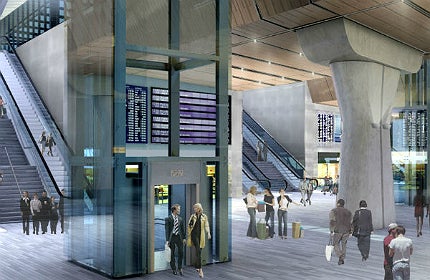 David Watts is managing director of CCD Design & Ergonomics, a specialist consultancy that applies the science of human factors to design projects across the rail, aviation, urban transport security and emergency services sectors. Adam Parkes is principal human factors consultant at CCD, and project lead for the redevelopment of London Bridge Station.

David Watts: CCD Ergonomics and Design is a consultancy that uses ergonomics and human factors to understand how people think and behave in a range of environments.

"The rail sector is ahead of the game in understanding the importance of human behaviour."

In the past 35 years we’ve completed in the region of 1,200 projects in three core areas. First, we design integrated control rooms such as the one at the Large Hadron Collider near Geneva in Switzerland, and at the national air traffic control centre at Swanwick, Hampshire, UK.

Second, we provide consultancy around human behaviour, including passenger interaction work during the redevelopment of King’s Cross Station and sub-surface line (SSL) upgrades for the London Underground, and passenger experience work for High Speed 2 (HS2).

Finally, CCD is involved in wayfinding and signage in railway stations and airports, which is of increasing importance. Ensuring that greater numbers of travellers can move freely and efficiently to, through and from a transport hub is essential to maintaining the operational effectiveness of the transport system.

JT: How can the understanding of human behaviour inform major design and engineering projects?

DW: Ergonomics and human factors are about looking in a scientific way at people and their needs, and then providing analytical evidence based on psychological, behavioural and physical factors.

Human factors has always been accepted in regulated, high-hazard industries, such as nuclear and defence, but increasingly the rail sector is ahead of the game in understanding the importance of human behaviour and emerging trends around passenger experience.

Good design incentivises, not imposes – we employ a host of ethnographical methods to gain insight into passenger behaviour without affecting or guiding it. Commuters are very skilled at finding the fastest way through any environment, whether that’s the way they are supposed to go or not. They don’t want to feel like they’re being corralled, controlled or restrained, but that they have free will – the challenge for us as designers is to make that work in terms of what we want the station to achieve.

Adam Parkes: CCD employs a variety of scientific methods and tools, and approaches the ergonomics process in a very structured manner, by working with integrated project and security teams, communications engineers, architects and Network rail operators and staff. We leverage our knowledge of passenger behaviour and how they will behave and interact within a station, and make sure they are considered throughout the design process.

JT: What is CCD’s involvement in the £700m redevelopment of London Bridge Station?

DW: CCD’s input at London Bridge focuses on a number of areas. The first involves consulting with Network Rail about the operational concept for the station, which is going to require them to operate it in a different way – we’ve been working with them to facilitate some of their thinking.

"Our job is to make the interchanges at London Bridge as intuitive as possible, so that 90 million passengers can move through the station."

The second point relates to how people move through the station. For our work on HS2, we used experts who worked on the spectator experience at the London Olympics to develop the concept of ‘high-performing’ passengers.

How do you influence passenger behaviour to willingly get them to do the little things that you need them to do, like arriving at the gate lines with their tickets ready?

With wayfinding, we are looking at the door-to-door journey through a passenger’s eyes. It’s very easy to think there are simply commuters and then there are leisure travellers, but in fact people’s behaviour and needs are much more subtle and individual than that. CCD has provided input to ensure that passenger information requirements are considered alongside the operational demands of the station.

Beyond this, our remit includes involvement in the design of the station control room and ticket office, as well as station systems such as the passenger information displays.

AP: London Bridge is increasingly going to be used as an interchange hub. People will move from the trains to use the underground, taxis, buses, bicycles and river taxis. Our job is to free up those pinch points and make the interchanges as intuitive as possible, so that 90 million passengers can move through the station efficiently, rather than causing bottlenecks or crowds.

DW: Journey mapping is very important to us in terms of how we look at and communicate with people about the different stages of their journey. Typically, we interview passengers and organise observation journeys where we travel with volunteers and record their experiences.

One of the challenges we face is how the design works with that passenger behaviour; there’s no point in trying to do things that people will either violate or ignore. King’s Cross, for example, is designed for a clockwise flow of people. It was imagined that people would use the concourse, stay away from the platform end and wouldn’t use the bridge over the platforms.

However, if you spend any time there, it serves as a neat reminder of how commuters like to subvert the way that we in the design community might want them to use the space.

AP: We are in the process of constructing a full-scale mock up of the integrated station control room at London Bridge, including the layout and the design of the workstations, where staff will sit, how systems are presented to them and how the room works together to provide all the necessary information for safe and efficient station management.

We will then place staff from Network Rail and different train operating companies (TOCS) in that environment, work though a variety of different scenarios to see how they interact with each other and the technology, and then go away and refine the control room design to suit all user needs.

JT: How will designers influence railway passenger behaviour in the future?

DW: There are several interesting themes here. One is the comparison between passenger behaviour at railway stations and at airports. In some ways, railway stations haven’t changed a great deal over recent years, yet airports are changing quite radically in the way they approach the passenger experience.

"Passengers don’t want to feel like they’re being corralled, controlled or restrained, but that they have free will."

Passenger behaviour is also changing in relation to technology use. Clearly, we are witnessing a move away from ticket offices, with much greater volumes of ticket vending machines, and more tickets being purchased online and on smart phones; this in turn is influencing the journey steps that people go through.

Another issue is what the station is there to do and how passengers interact with elements such as retail. The industry is doing very well at understanding the concept of stations as destinations that people gravitate towards without actually travelling.

The expectation of the rail passenger going forward is that they want high-quality travel with an element of joy and theatre, whether that’s via the architecture or the service that’s provided. What we have to do as an industry is create these positive experiences, but also make sure that the ticket barriers are all working and are not just set to Oyster cards instead of all tickets – all those things that annoy us on a daily basis.

Unless we can master those basics, the experiences that we add on top become devalued.

As the UK rail industry’s Enabling Innovation Team (EIT) asks inventors and companies to submit innovative ideas as part of the Radical Train project, its coordinator, Richard Jones, explains what exactly the project is hoping to achieve and how innovation is the key to the industry’s future success.

Forecast spending for 2012 has been lowered as government officials confirm the UK will pull out of Afghanistan by 2014.Network Rail is about to open the first stage of the redeveloped Birmingham New Street station to the public.