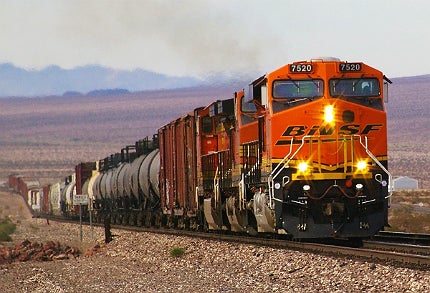 In a recent feature, we explored the two most prominent candidates to replace diesel-based rail propulsion – liquefied natural gas (LNG) and hydrogen (or hydrail, as it is commonly known in its rail application). In that feature, we suggested the most likely route for the rail industry to take would be to initially invest in LNG as a ‘bridge’ fuel, a more environmentally and financially efficient propulsion technology than diesel that could be used while hydrail technology establishes itself.

"The capital investment will lock it, one way or the other."

Stan Thompson, chairman of the US’s Hydrogen Economy Advancement Team and a hydrail advocate who was instrumental in setting up the annual International Hydrail Conference, agrees that this is the most likely scenario, at least in his home country.

"As things stand now, it’s likely that the United States, which has a very large locomotive fleet, will simply take the short way out and will go to converting a lot of locomotives to natural gas," he says. "If that happens, then they will create an ongoing market for natural gas in its raw form, which means that there will be a demand for a carbon-emitting fuel that will have a long, embedded capital life."

Moving from diesel to LNG is a forward step, but a fundamentally conservative one, driven by the huge glut of shale gas that has become available through the environmentally dubious hydraulic fracturing (fracking) method. For Thompson, this step is not enough – he believes manufacturers and operators need to invest larger sums today to future-proof their new fleets in readiness for wider hydrogen availability down the line.

"If they could put a little more into the conversions, then the locomotives would be immediately applicable to hydrogen from nuclear, wind, solar, solar concentrate, hydro-electric and all the emerging new ways of making hydrogen. And so it’s a question of committing to something that sticks us in the carbon era for another 20 to 30 years, as opposed to something that puts us on the way to the sustainable, renewable world. The capital investment will lock it, one way or the other."

The Karlsruhe innovation: implications for hydrail

The signs seem to be pointing towards the creation of a new generation of LNG-specific locomotives that would, in Thompson’s words, "stop or substantially hold back the transition to hydrogen", but as hydrogen production continues to gather momentum and researchers find new ways to create hydrogen without emissions, the industry might look back on this as a short-sighted decision.

"Natural gas could become a key enabler in the journey towards a hydrogen economy."

A particularly exciting example of the technological leaps being made in hydrogen production has come from the Karlsruhe Institute of Technology in Germany. Researchers at the institute are developing a new method of separating hydrogen from natural gas using a liquid-metal bubble column, with the by-product being solid carbon rather than carbon dioxide emissions.

This innovation, which is still in the early testing phases and needs to be proven as a scalable and commercial technology, could have massive implications across the power sector, as it would potentially allow natural gas wellheads to be upgraded to convert extracted natural gas to pure hydrogen without the release of any harmful emissions. In essence, instead of holding back the rail industry’s progression to zero-emissions hydrail operations, natural gas could become a key enabler in the journey towards a hydrogen economy.

For the rail market, developments at Karlsruhe are another indication that the potential hydrogen supply chain is multiplying, easing concerns about supply when compared to LNG. In any case, if new trains are equipped correctly, they should be able to use either LNG or hydrogen, depending on the nature of available resources in the future.

This flexibility, coupled with the fact that railway electrification is rapidly becoming unsustainably expensive (US electrification costs have risen from around $2m per mile in 2003 to more than $10m per mile today, according to Thompson), makes it clear to Thompson that the rail sector should act sooner rather than later when considering hydrogen propulsion. If there’s a finite amount of cash available to invest in next-generation rail fuel systems – and in the current economic climate that is certainly the case – doesn’t it make sense that every dollar is spent on a long-term solution rather than short-term mitigation?

And the significance of the Karlsruhe innovation is that it has the potential to align the objectives of both natural gas and hydrogen production. "In the short term, the new-found bounty in natural gas is bound to encourage the ‘solacaust denier’ community; fracking will bloom long before it fades," says Thompson.

"But wellhead pyrolysis of natural gas on the Karlsruhe model – if it proves feasible – might accommodate natural gas interests without foreclosing a path into the networked hydrogen future."

Hydrail and LNG: the future of railway propulsion?

As the railway industry considers possible replacements for carbon-intensive diesel fuel, hydrogen and LNG stand out as major contenders.