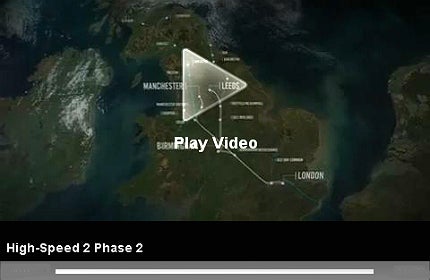 "It is vital that we get on board the high-speed revolution." Those were the words of UK Prime Minister David Cameron, following his government’s announcement earlier this month of its plans for the second phase of High-Speed 2 (HS2), the ambitious £33bn infrastructure project aiming to create a high-speed rail spine running from London to Birmingham and then on to key cities in the East Midlands and the North.

The first phase of the project includes the initial high-speed link between London and Birmingham, due to open in 2026 and with the start of construction planned for 2017. The second phase, which is set to be completed in 2032, involves two further sections of the Y-shaped line, which splits at Birmingham, with one arm extending to Crewe and Manchester and the other running to Leeds via Derby, Nottingham and Sheffield. With trains set to run at up to 250mph on the line, journey times between many of the UK’s most important cities could be halved.

It’s a grand, eye-catching project that will dwarf even London’s under-construction Crossrail scheme in scope and complexity. And if, as Cameron said, the UK is embroiled in a "global race" to secure the benefits of high-speed rail, the completion of HS2 would go some way towards catching up with the far-superior high-speed networks in nearby European countries such as Spain, France and Germany.

"With trains set to run at up to 250mph, journey times between many of the UK’s most important cities could be halved."

This month’s concerted push behind HS2’s second phase also marks a dramatic turnaround for a project that, just last summer, was thought to be languishing on the edge of cancellation. And while the high-speed project has received an injection of renewed enthusiasm from the government, as well as support from the opposition Labour Party, it is proving much more controversial with independent organisations and campaign groups.

On the broadest level, many critics of HS2 are taking issue with the government’s claims that the project will strike a blow against the UK’s north-south economic divide, stimulating regional growth and creating up to 100,000 new jobs.

In a period of severe economic austerity, one in which essential benefits and services are being slashed across the country, many question the sense of investing billions into a behemoth transport project, the economic benefits of which are as vague as they are distant.

Professor Greg Marsden, director of Leeds University’s Institute for Transport Studies, told The Independent newspaper that the government needs to get much more specific on the advantages that would justify the project’s cost. "It is hard to assess just what HS2 will achieve," Marsden said.

Meanwhile, campaigners have cried foul on the government’s promise that HS2 will revitalise local economies in the North and create a more equal playing field with London.

For Penny Gaines, chair of the Stop HS2 campaign group, which has been calling for HS2’s cancellation since its first London-Birmingham phase was announced, the money would be better spent on expanding local and regional transport capacity.

"The government talks about jobs and regenerating the North, but in reality, high-speed rail projects elsewhere have sucked jobs to the capital cities, away from the regions," Gaines said. "HS2 focuses on long-distance journeys, when the main passenger growth is in regional and local areas. HS2 is a London-centric proposal that seems focused on extending the London commuter belt beyond Birmingham, when we need to create an engine for growth in the North, providing access to jobs for people who want to live and work in the North."

HS2: the devil’s in the details

While HS2 has been welcomed by many local politicians up and down the country as a growth generator and an economic facilitator for local people, the details that have been revealed about phase two’s planned route have raised major concerns on both operational and environmental grounds.

"Campaigners have cried foul on the government’s promise that HS2 will revitalise local economies in the North."

In the East Midlands, for example, HS2’s planned route will take it to a new station site between Derby and Nottingham, with the route using land that has already been set aside for a large-scale freight terminal that would connect to the major freight hub of East Midlands Airport and create thousands of local jobs.

"We are going to have all the pain and none of the gain," North West Leicestershire MP Andrew Bridgen told the BBC. "This project could well scupper a £450m private-sector investment in a regional transport hub just north of the airport. It is planned to create nearly 7,000 jobs in my constituency."

The inevitable disruption that such a wide-ranging construction project would have on the surrounding countryside has also set off alarm bells for the stewards of Britain’s wildlife and landscape. According to the Wildlife Trusts, the full route of HS2 runs through four Wildlife Trust reserves, ten Sites of Special Scientific Interest (SSSIs), more than 50 ancient woodlands and "numerous" local wildlife sites.

One particularly controversial site for the Wildlife Trusts is the Park Hall nature reserve near Birmingham, an important stretch of the River Tame that hosts a resurgent population of otters and water voles, as well as flourishing populations of bats, nesting birds and rare insects. The current HS2 plans would divert a mile-long section of the river, potentially robbing local wildlife of vital habitat. While the Wildlife Trusts have not actively come out against HS2, a host of understandable environmental concerns like this have yet to be addressed by the government in any detail.

National vs local: a battle of perspectives

There’s a certain irony surrounding HS2 at this early stage in its planning and development – for a project that intends to knit the country more closely together, it has quite effectively emphasised the issues that divide it. The scheme essentially favours long-term national priorities over the immediate wishes of local communities, and caters to the needs of economically important urban centres over those of the rural areas in between, which will likely have to suffer through the long construction process, without then enjoying the benefits at the other end.

"For local residents, small-scale transport upgrades are likely to be just as important as the arrival of HS2."

As a result, business groups have predominantly welcomed HS2 for its potential to stimulate investment and open new opportunities for a variety of businesses. But the government would be foolish to forget the importance of local priorities like the preservation of landscape and wildlife in its rush to clamber aboard the "high-speed revolution".

For local residents, small-scale transport upgrades are likely to be just as important as the arrival of HS2. Professor Phil Blythe, chair of the Institution of Engineering and Technology’s Transport Policy Panel, has argued that improving existing transport infrastructure will be the key to unlocking HS2’s full potential for nearby communities.

"If the government intends to proceed with the development of a new high speed rail line, it must consider connections to the wider transport network at the outset and plan these effectively to ensure seamless, congestion free, door-to-door journeys," Blythe said.

"As most of the proposed stations are on the outskirts of major conurbations, this is crucial to help maximise the benefits of any new line and to ensure local authorities can plan local transport solutions effectively to avoid issues such as a huge increase in new road users trying to access stations."

But in a country with such a dense population, the fact remains that it would be near-impossible to build a rail project this large without provoking the ire of any communities or damaging any natural eco-systems. Even UK Transport Secretary Patrick McLoughlin, the face of HS2, admitted as much when he told The Telegraph: "You can’t build a brand new line and not have problems. There will be some areas where you are going to have to negotiate."

Indeed, the fate of HS2, with its second phase set to move into the public consultation and environmental review process in 2014, will rest on the UK Government’s ability to conduct these kinds of negotiations – to balance the demands of the public in specific areas of resistance and to convincingly make HS2’s business case to the country as a whole.

HS2’s timescale means that several governments will have come and gone by the time the project is finished, and reports suggest that endless judicial reviews and legal challenges to the first phase’s consultation process could push the start of construction from 2017 to 2022 or beyond. With a wide spectrum of opponents ranged against it and major decisions on issues such as connectivity to Heathrow Airport still to be made, HS2’s road to completion is likely to be long and rocky.